Some things I remember:

The plot involved a sole human representative to what was effectively an alien "United Nations" type of organization. There were myriad types of aliens, many of whom were completely biologically incompatible. Even the ones that could live in the same conditions generally found each other either repugnant or incomprehensible.

The main character ended up feeling incredibly lonely and was "set up" with a superficially similar humanoid female, but found their pheromones were incompatible and it was still difficult to communicate.

OK, it's been killing me, but I finally found the book I was thinking of -- Becoming Alien. I had not remembered everything correctly -- notably the title was way off and the year of publication is 1988. For some reason I recall reading it quite a bit later than that.

Rebecca Ore did not win any awards for Becoming Alien, but she was shortlisted for the John W. Campbell Award for Best New Writer, which is almost certainly what I recalled. The book itself was nominated for a Philip K. Dick award.

I also apparently lost most of the plot and really fixated on the emotional distance Tom experienced while living on the station, which probably didn't help people in identifying the story.

16-year old boy finds an alien crash-landed on a farm and ends up being recruited to join the Federation of Sapients - and adventuring out among the stars.

A few points of similarity to C.S. Friedman's This Alien Shore

It is the second stage of human colonization--the first age, humanity's initial attempt to people the stars, ended in disaster when it was discovered that Earth's original superluminal drive did permanent genetic damage to all who used it--mutating Earth's far-flung colonists in mind and body. Now, one of Earth's first colonies has given humanity back the stars, but at a high price--a monopoly over all human commerce. And when a satellite in Earth's outer orbit is viciously attacked by corporate raiders, an unusual young woman flees to a ship bound for the Up-and-Out.

The female protagonist winds up on a ship populated by myriad human variants, some of whom are quite alien and winds up feeling very alone. The main male character is from a variant that is very tech-oriented and has challenges reading emotion, which complicates communication. 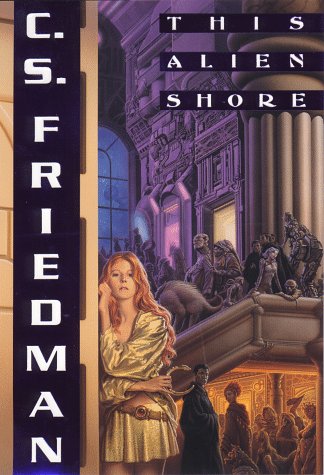 6
Book series about a torturing doctor on a starship
18
Old SF novel about a white-haired young woman, alien or half-alien, who tutors human kids
10
Space stingrays planet is dying; human becomes one of them
6
What is this early 90s horror novel with an evil hole in the ground?
7
Book with female explorer on an alien planet, seduced by pitcher-plant and almost eaten
18
Far future SF novel with humans living in genetically engineered habitats in space
12
Book with a female lead on a ship made of microorganisms