I have a very vague memory of a live-action movie or episode I watched on Swedish TV in the mid-to-late 90's, most likely in English.

The setting was on some kind of spaceship, I believe captained by a woman. One of the characters was a male alien who looked human aside from horns growing out of his forehead. These horns had some kind of ability (lightning?) that was involuntarily triggered by him sneezing.

The plot involved a video recording sent back in time by the crew's future selves warning of some kind of upcoming danger. In the recording, the alien was pointing at his own horns. Eventually, those events come to pass and the ship is in danger. The day is saved by the alien sneezing and accidentally firing his plot device horn ability at just the right thing to make the ship work again.

I seem to recall the story being kind of stupid, so I wouldn't be surprised if it was something aimed at kids or teenagers.

This sounds very much like the show "Space Cases".

The show premiered in USA in 1996 on Nickelodeon. I can't find any record of if or when it premiered in Sweden. The show was created in Canada.

For the details you remember; the captain of the ship was an adult female named Theresa James "T.J." Davenport played by Cary Lawrence.

The male alien with the 'horns' on his head that shoot electricity most sounds like the character Bova. 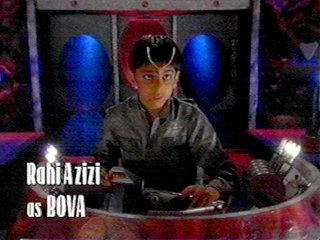 Bova doesn't exactly have horns, they are more antenna. His antenna do shoot electricity, and Bova does have a habit of shooting accidentally. A key point in the first episode Bova falls and accidentally fires a shot of electricity at the ships navigation system, causing the ship to jump years away from their home.

As for a message being sent from the future to their past selves, it is possible that is the plot of one of the episodes, though thus far I have been unable to determine which episode it is.

Not the answer you're looking for? Browse other questions tagged story-identification time-travel spaceship or ask your own question.

34
What is this Disney scifi movie from the late 80s/early 90s?
13
Need help identifying scifi short story about boy getting lost after unknowingly boarding a spacecraft
6
Time travel episode from 1970s
10
Title/author of book in which a young low-ranking officer ends up captain of spaceship?
8
Book - Three teenagers find a spaceship and gain powers from headsets in it
5
Picture book with various information about aliens, including an adventure gamebook style section
8
Child's science fiction book about kids in space with a metal disk and an alien chasing them after it
6
'80s movie with a humanoid alien in a glass casket