80s-90s Book (part of a series?) About Teenager Who Fights Greek Monsters

I remember buying a older looking book in the 90s at a yard sale about this group of teenage boys worked for a sort of Greek monster exterminator/hero training program.

The one I particularly remember reading was a gorgon in a rich lady's basement. The gorgon had turned the "star" exterminator into stone and had defeated many of the previous people who came to fight it. When the main character vanquished the gorgon, the stone people came back to life (I think one person was missing a nose they had lost as a statue). I remember this particular gorgon was smart and would use dust to disable the shields they were using as mirrors, which was why it had defeated so many people. Gorgons were supposed to be considered pretty beginner, but this one was really smart.

I think it was set in a more modern time (i.e. not ancient Greece). I vaguely remember something like him using a trash can lid to defeat the gorgon. It was a bird-monster gorgon, not a Medusa type. I think the main character had some sort of sidekick.

I think the kids in the program, at least some of them had god parents. I can't remember if the main character did or if he did, it wasn't one of the main gods.

I think it was part of a series but I don't know for sure. I think it was some sort of school for heroes or something and there was a teacher. I remember I read this book a few times because I really liked it, and I would love to reread it now or find other books in the series.

I think there were other Greek monsters, like maybe a Cyclops that was part of the school? I will try to provide any other information I can think of. This has just been really itching at me for a while and I haven't been able to find anything.

I remember the cover having grey tones. I think it was a picture of him with the sword and shield (garbage can lid??) hiding from the gorgon, which was also in the picture.

The Gorgon Slayer by Gary Paulsen? Came out in 1995. Part of the World of Adventure series. 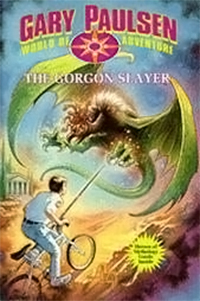 The story is about Warren Trumbull who lives in a world where mythological creatures are a fact and often a nuisance. Warren works for an eight-foot Cyclops, Princey, who runs an agency that specializes in dealing with mythological creature removal. Today Warren and his friend Rick are assigned the task of killing a Gorgon residing in the basement of Helga Thorenson.

5
Late 80s/early 90s DC Comics arc with Greek (and Roman?) gods involved?
5
Show that I watched on Cartoon Network, about teenagers who could transform to monsters
7
Book about a tongueless teenager who might be an alien
8
Book series about these teenagers with special powers and every book changed main characters
7
1970s or 80s kids' book series about friendly android doppelgangers
30
Novel involving a sentient AI, alien hogs, and a Chinese colony governed by OCD
0
Online manga about a boy accidentally summoning a demon at his school who fights people
6
Help identify story: 80s/90s childrens book about a child in a society ruled by robots
5
Book about a scientist who gives teens powers