Found it in a used book store, don't have it anymore. I'm almost certain the title is Sphere, but it was written about 20-25 years before Crichton's book of the same name. I'm trying to find out the author. Cover illustration showed a guy dressed like a bell-bottomed hippie hovering over a landscape inside a glass tube. The tube was the sphere in the title, a personal travel device that could protect the person inside (by making them invisible, I think). It was made from Martian technology that had been shared with the protagonist telepathically when he lived on Mars (he is human). Now that he was back on Earth, the government wants the technology - but it was entrusted to him and he cannot reveal it. So most of the book has him running from the authorities who want to extract it from him somehow. He meets a woman who helps him escape, and there is a lot of political discussion as well as details on Martian society, empathy, and how they bonded with him. I think it ends with them making it to safety. I think it was a fairly short novel. Every online search I've done only turns up Crichton's book or the movie, can't seem to find this one. I'd like to read it again.

It's Shield, not Sphere. The author is Poul Anderson.

The cover image you describe brought it back immediately. 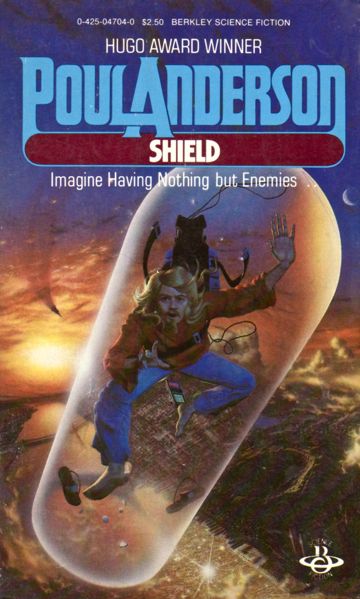 Just in case there is more than one book with a "Cover illustration [that] showed a guy dressed like a bell-bottomed hippie hovering over a landscape inside a glass tube":

Koskinen had returned to earth with a strange new "Shield" - a device which enclosed the wearer in a force shield which absorbed all energies below a certain level. Light could come through the Shield, but no weapon known to man could penetrate it. Koskinen had developed the Shield in collaboration with the Martians. From the moment of his return to earth he was in deadly danger. His own country sent men to kill him to prevent the Shield from falling into enemy hands Soon the whole civilized world was searching for this one man - a man armed with the greatest potential military weapon mankind had ever seen. The only question was which power would possess the Shield as its very own?

Not the answer you're looking for? Browse other questions tagged story-identification technology mars politics government or ask your own question.

10
60s-70s novel written from a werewolf's point of view
20
Dystopian story where medicine is illegal
9
Seeking old short story about a tube inside which time runs backwards
10
Really weird sci-fi movie I saw as a kid
7
Book about a physicist who invents a device that swaps a sphere of matter from this world to another universe/time
6
Soviet Sci-Fi movie from the '60s(?)/'70s(?)