Why would the Doctor get his tie?

In the first episode with Martha Jones (S3:E1), in the first few scenes of the show, he takes off his tie and drops it, completely unknowing of his future to return and retrieve it.

Later, to show Martha he can travel in time, he goes back and picks the tie of the floor. Unless we're just having to accept that tie stayed completely dry all day and in that position, we can assume that The Doctor basically did something he was against -- visit his own timeline -- seconds within the drop, to pick it up and return. This is also risking being seen, and Time Lord would recognise the Tardis sounding.

Regardless of the state of that tie (holding the suspension of disbelief), that was an incredibly risky move. While it holds up to the feel of Tennant's magical, quick, exciting Doctor, it's not very Doctor-like.

Why would a time-lord, who consistently travels around time constantly writing parts in his image (or stopping others from ruining that image), go back on his own time-line, just to return and show Martha? It seems like insanity.

The entire point of the scene is that the Doctor traveled backwards in time, created a memorable event and then immediately left.

The Doctor you see accosting Martha at the start of the show isn't a Doctor from a different timeline, he's the same Doctor you see at the end of the episode, just moving backwards along Martha's timeline.

Now, obviously there's a slight risk that he'll bump into himself (and cause a rupture in space and time, destroying the universe), but I'm guessing when you spend as much time in 20th/21st Century London as the Doctor does, he's gotten used to just pretending that he doesn't see himself.

As to the tie, you can see him pocket it as he walks away. 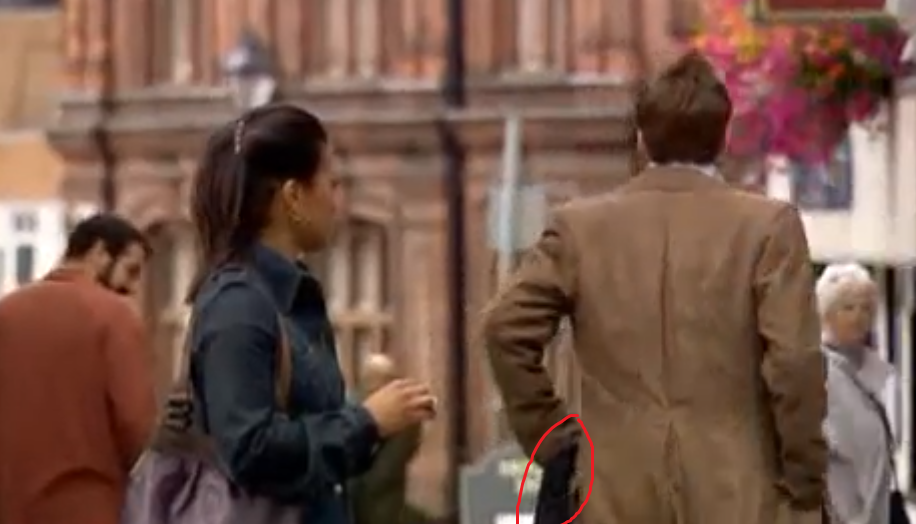 9
Why can't The Doctor save his own planet from destruction?
31
Who exactly is the Valeyard, considering the events of Time of The Doctor?
5
In what sense has the Doctor been running from the Question "all his life"?
15
When was David Tennant's Doctor in "Day of The Doctor"?
9
How did the meta-crisis Doctor survive (or remain sane) when Doctor-Donna didn’t?
3
Which incarnation of The Doctor does Adrian resemble?
3
Why does The Doctor take the gun from Wilfred when he hears about the Time Lords returning?
2
Was there a canon reason for the TARDIS placing 'John Smith' in 1913 (Human Nature/Family of Blood)?