An anime about a boy related to gems/crystals

I'd watched the anime between 2008 and 2012, although I feel it was closer to 2010. The anime was originally Japanese but had English subtitles, I'm not sure it had even been dubbed. The anime had been available on Crunchyroll, although is no longer available.

There’s a boy who at night turns into a beast because of a gem/crystal inside him. I believe that the first episode shows him turning into a monster in black. Later on, a girl and her butler meet the main character trying to help him but he rejects their help. The girl explains to him about the power of the gym/crystal that he posses and he still angrily rejects them and forces them to leave.

He then starts to feel a pain from his forehand and grows a large crystal/gym like horn and once more turns into a monster that kills and hunts another monster like itself. He eventually gets help from the girl and using the power the girl gives him, he’s able to control his power and help mankind fight off these monsters. I think near the end of the anime he fights a Medusa like monster or something along those lines.

I think the title is "Sacred Seven". The boy(Alma Tandoji) have a crystal inside his body that can make him transform. One day, Ruri Alba, a girl accompanied by her butler and maids, visits him to help him control the stone with her power. At first the boy refused. Later on the boy accepts the girl's help and becomes a hero who fights a stone monster.

Alma Tandoji lives a lonely life. One day, Ruri Alba, a girl accompanied by her butler and maids, visits him. Knowing the power of Sacred Seven is latent within Alma, she asks him to lend her his powers. However, he refuses and drives her away since he injured many with his unusual strength in the past.

Meanwhile, a fiendish Dark Stone creature suddenly appears in this peaceful town in the Kanto region. Only Alma's power of Sacred Seven can fight against it. But Alma just lets his power run amuck and things begin to get worse. Ruri raised her gemstone in order to release his true abilities, My Soul I give to you.

With Ruri's wishes engraved in it, will Alma be able to defeat the Dark Stone? 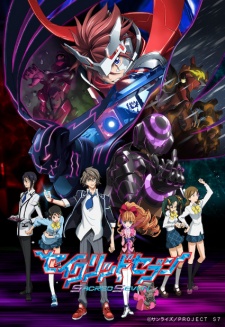 6
What anime features a boy with a gem or crystal that gives him powers to transform into an organic robot of some sort?

7
Anime movie involving people exploding into monsters?
10
Anime about a teenager with superpowers who hunts demons
9
Anime where the first episode is about a 10 years old homeless boy
5
Anime where they summon monsters using crystal balls attached into their body parts
10
Anime with a boy hiring a creature from a stone, meets a man named Dante and starts a journey to collect crystals
4
Isekai anime where the main character becomes a Forger and creates weapons by drawing them
2
Anime: 2 girls at a cafe, gem falls into one of their drinks