I read this post-apocalyptic novel in the 60s or 70s. I remember the cover showed a man in a helicopter hovering over an American Indian on horseback who had just fired an arrow into the front bubble of the chopper that had stopped just short of piecing the pilot.

The plot revolved around a secret bunker somewhere in the Southwest (from our time), which was supposed to be manned by a carefully selected, elite group of mentally and physically perfect human beings meant to survive a coming nuclear war and rebuild civilization. However, on the day the war comes, most of the bunker’s chosen ones have gone on leave to a nearby city to celebrate something and the bunker is only manned by a skeleton crew. The bunker personnel hastily gather in some random back-wood tourists and seal the hatch.

A nearby blast creates a crater above them which quickly fills with water from a nearby river, trapping the inhabitants in the shelter. A century or two later one teenager makes it out alive (many have tried and failed) from the bottom of the lake and is able to open up an alternate entrance in a cave that can only be opened from the outside. He finds a world where Indians rule (survived on reservation land nobody thought was worth bombing). At first he makes friends, but conflict soon arises.

This is Full Circle by Bruce Wallace Ariss, 1963. Larry describes the first part of the book exactly - the secret bunker, the war, the crater lake, the escape from the bunker and contact with Native Americans, who have gone back to the old ways. And that is all I know because that's where I left off! 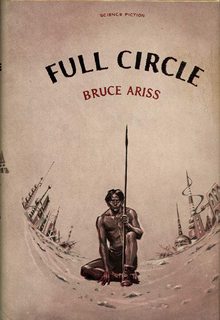