What happened to the crew and guards of the Tantive IV?

In Star Wars: A New Hope, we see a number of Alderaanian consular guards that were on the Tantive IV being escorted away by Stormtroopers. But what was the fate of these guards and the crew of the ship?

I dived into Wookieepedia and found that one of the guards, Gale Torg was one of those guards that were on the Tantive IV (he is listed as a crew member); He was then present at the awards ceremony on Yavin 4 as one of the Honor Guards. This suggests to me that he either was captured and escaped or managed to flee at some point.

We learn in the Rise of Skywalker: Visual Dictionary that although the crew were evidently killed, the ship itself survived. With the dissolution of the Senate and the new-found power of the Empire, getting rid of all of the evidence was a low priority.

The Tantive IV was the historic Alderaanian consular ship that shuttled the Death Star plans away from Scarif after the Rebel Alliance's first victory. A faulty hyperdrive subsystem allowed the Empire to track and intercept it over Tatooine. The captured Tantive IV was scheduled to be destroyed as part of a falsified report to the Senate, but the Senate was disbanded within days and the ship's destruction was no longer a priority.

Eventually it made its way back into Leia's possession.

Leia has recently been reunited with her consular ship from her teen years, which was discovered moldering in a hangar in the Yarma system by a sympathetic former Imperial senator. It was returned as a gift.

According to the fully canon Star Wars: Ships of the Galaxy, the Tantive IV was destroyed by the Empire shortly after being captured. Given that none of the crew were able to be coerced into revealing the location of the Rebel base on Yavin, it's likely that the majority of its senior crew were killed during the boarding process and the rest of the crew were on board the ship when it was destroyed. 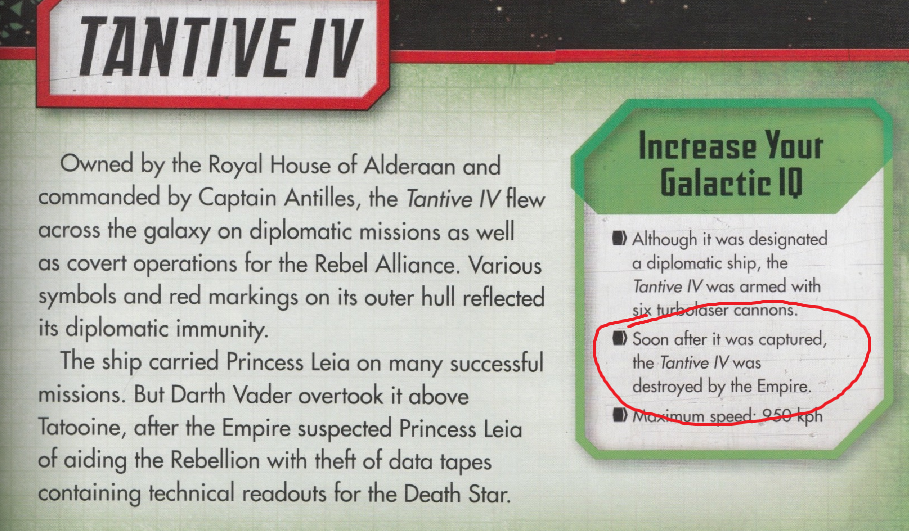 They were most likely killed and the Tantive IV was destroyed. The case for this is

So how come Gale Torg is listed as a Tantive IV crew member but shows up on Yavin IV? The only logical explanation is that they're listing any named crew members who ever served aboard the ship during her entire history. So Gale Torg (given his close connections to Leia) probably served aboard the Tantive IV at some point, but was not there on the day she met up with Vader.

NOTE - Originally it was implied (and even stated in canon) that the Tantive IV was destroyed. The Rise of Skywalker retconned that so the ship itself was not destroyed by Vader.

It's now confirmed that during the Battle of Exegol in Episode IX, the Tantive IV was struck by Sidious' lightning and was unable to regain control, destroying the ship. Nien Numb was piloting it and was killed.

10
What happened after Alderaan blew up in A New Hope?
45
What Happened to TK-421?
4
Which shot first on screen, the Tantive IV or the Devastator in the original Star Wars?
18
What's the origin of the name of the Tantive IV?
9
Why didn't the Tantive IV jump to hyperspace in episode IV?
9
What is Snoke’s guards’ armor made of?
20
What was the nature of the new Imperial Guards?
32
Why did the Imperial Star Destroyer open fire on the Tantive IV?