So I'm trying to find a trilogy of books I read when I was a teen.

It started on a cruise ship, the protagonist is this kid, on vacation with his parents I believe (or just dad?) and he meets this girl, all dressed in white during the trip. She doesn't talk or acknowledge him and the dad's girl says that she is autistic.

Fast forward, the ship gets stuck in ice, I guess? And they have to go to this Antarctic Lab. Boy notices that the spiders all crawl outside of the lab and freeze outside as if they are running away from something in the lab.

I remember at some point that the author describes a spider as big as a Yorkshire Terrier, that really stuck to me. I also remember this being about Nyarlathotep and him being represented as a huge sea monster underneath the ship and wanting to wreck the world.

Also the girl wasn't autistic at all and it was just stuck inside her mind, controlled by the dreams of this old god.

I read this in 2008, I'm pretty sure as I was going to get into my 12th Grade. The covers were all with an octopus grabbing some sort of object (a diamond?), the first cover was in blue, I'm 100% sure. I've also read these books in Portuguese but I cannot remember the publisher company.

Gelo (Génesis #1, 2006) by Wolfgang and Heike Hohlbein. It's the first book of the Génesis series, all books of which have an octopus lovingly hugging a diamond/a planet on the cover, as you can see here.

From Goodreads and from our good friend Google Translate, since I didn't find an English version of that (originally German) book:

On board of a ship traveling between Cape Town, South Africa, and Brisbane, Australia. Ben, a seventeen-year-old, spends his days dying of boredom ... until, before the icy Antarctica, the luxury package is attacked by an ominous ghost ship, turning into a horror scene, executed by a crew greedy for blood. But when the ship is stranded in Antarctica, the nightmare becomes truly gloomy. Under the immutable ice, inhabits an age-old and malevolent power, whose time has just burst .. 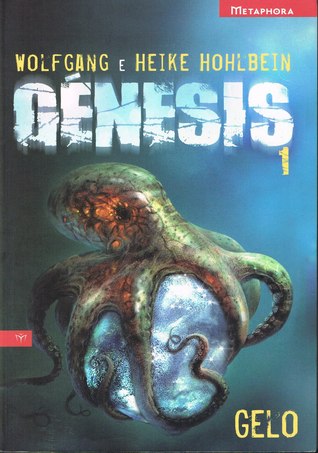 More precisely, this review contains a lot of the plot points you mentioned:

Range of settings: (a) a luxurious cruise ship on the way to Australia. (b) a meteorological station in the antarctic winter. (c) a secret laboratory harboring secret research.

Fact: When the monster dies, Sasha becomes able to talk (and interact/ respond to her surroundings). Conclusion:

A: She was never autistic in the first place, it was just the creature's supernatural influence being misdiagnosed (because doctors aren't always right). Which adds up to the repeating pattern of supernatural phenomena being discarded as such, and explained as something else (like Ben's premonitions and theories);

B: She never stopped being autistic, but the creature's supernatural influence has kept her permanently on the verge of overload, and now that it's gone she can talk and respond properly.

Found with the Google query book nyarlathotep cruise antartica site:goodreads.com ; the second result is the third book in the series (Diamante), the cover of which has the "brand" octopus.