Who is the little girl in Raising Steam who blocks the railway meant to be a reference to?

In Raising Steam, about 80% of the way in, a girl named Edith and her brothers intentionally block the railway so as to be able to save the train and be heroes.

“I dare say you do, but I don’t think you’d like Cedric who comes with them … Now, I admire the resourcefulness of your little plot, but people could have been hurt.” He raised his voice. “Can you imagine a railway accident? The screaming of the rails and the people inside and the explosion that scythes the countryside around when the boiler bursts? And you, little girl, and your little friends, would have done all that. Killed a trainload of people.”

He had to stop there because the girl looked like death. And, if his instincts were right, somewhat damp around the legs, not weeping for effect this time but traumatized, her face white.

Moist lowered his voice and said, “Yes, you’ve seen it in your head now, and probably, when you think about it again, you’ll remember that you very nearly killed lots of people.”

He then says two things that seem clearly to be making a reference to someone real.

He looked into her hopeful face and said, “I’ll square this with the engine driver, but if I was you I’d get my pencil and turn any clever ideas you have like this into a book or two. Those penny dreadfuls are all the rage in the railway bookshops. I hear there’s money in it, and you won’t meet Cedric that way. Oh, and don’t keep waving your pinafores at people. It could give quite the wrong idea in the dark.

And later to her father:

“Oh, and treasure your eldest daughter: you might be grateful for her imagination one day.”

Who is he referring to?

This refers to The Railway Children, by Edith Nesbit.

This famous early 20th-century English children's novel has a passage where the main characters (3 children, the oldest being a girl) block a railway after a landslide, waving their red petticoats to make the train stop. From Chapter VI, "Saviours of the Train" (the whole book is on Project Gutenberg):

“It's ALL coming down,” Peter tried to say, but he found there was hardly any voice to say it with. And, indeed, just as he spoke, the great rock, on the top of which the walking trees were, leaned slowly forward. The trees, ceasing to walk, stood still and shivered. Leaning with the rock, they seemed to hesitate a moment, and then rock and trees and grass and bushes, with a rushing sound, slipped right away from the face of the cutting and fell on the line with a blundering crash that could have been heard half a mile off. A cloud of dust rose up.

“The 11.29 down hasn't gone by yet. We must let them know at the station, or there'll be a most frightful accident.”

But Peter cried, “Come back!” and looked at Mother's watch. He was very prompt and businesslike, and his face looked whiter than they had ever seen it.

“If we only had something red,” Peter repeated, “we could go round the corner and wave to the train.”

“Oh, how hot I am!” she said; “and I thought it was going to be cold; I wish we hadn't put on our—” she stopped short, and then ended in quite a different tone—“our flannel petticoats.”

Bobbie turned at the bottom of the stairs.

She took the red flannel petticoat from him and tore it off an inch from the band. Then she tore the other in the same way.

“There!” said Peter, tearing in his turn. He divided each petticoat into three pieces. “Now, we've got six flags.” He looked at the watch again. “And we've got seven minutes. We must have flagstaffs.”

It seemed to her that they had been standing there for hours and hours, holding those silly little red flannel flags that no one would ever notice. The train wouldn't care. It would go rushing by them and tear round the corner and go crashing into that awful mound. And everyone would be killed. Her hands grew very cold and trembled so that she could hardly hold the flag. And then came the distant rumble and hum of the metals, and a puff of white steam showed far away along the stretch of line.

“Stand firm,” said Peter, “and wave like mad! When it gets to that big furze bush step back, but go on waving! Don't stand ON the line, Bobbie!”

“Oh, stop, stop, stop!” cried Bobbie. No one heard her. At least Peter and Phyllis didn't, for the oncoming rush of the train covered the sound of her voice with a mountain of sound. But afterwards she used to wonder whether the engine itself had not heard her. It seemed almost as though it had—for it slackened swiftly, slackened and stopped, not twenty yards from the place where Bobbie's two flags waved over the line. She saw the great black engine stop dead, but somehow she could not stop waving the flags. And when the driver and the fireman had got off the engine and Peter and Phyllis had gone to meet them and pour out their excited tale of the awful mound just round the corner, Bobbie still waved the flags but more and more feebly and jerkily.

When the others turned towards her she was lying across the line with her hands flung forward and still gripping the sticks of the little red flannel flags.

The joke seems to be that "Edith" in Raising Steam grows up to be a famous writer (hence "grateful for her imagination") and turns the idea of blocking a train (by "waving your pinafores", even) into a chapter in what's probably the best-known Nesbit novel.

This particular passage of The Railway Children is a very iconic one. The original illustration (I could only find a poor-quality one online) has been colourised for the cover of one edition of the book, and many other editions also have front covers with various artists' renderings of the event: 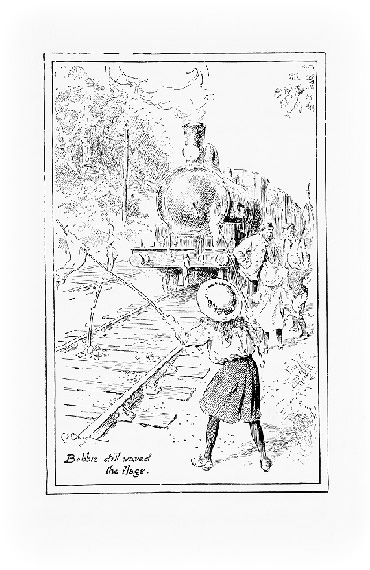 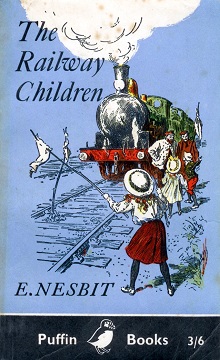 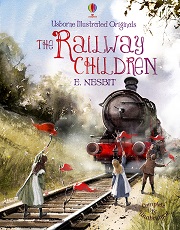 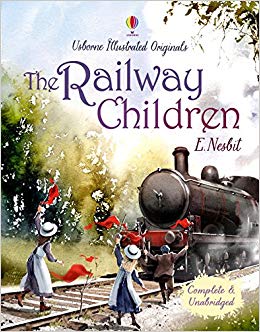 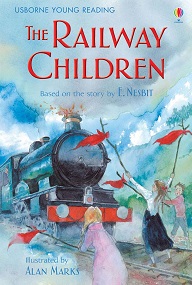