What is the Hong Kong Businessman shouting before he tries to jump out the window?

At approximately 6:57 into the Ready Player One film, there is a humorous scene in which the avatar (looking like Jason Voorhees) of a "Hong Kong Businessman" played by David Forman is killed. After being killed in the OASIS, the Hong Kong Businessman takes off his VR vizor, shouts something in a non-English language, runs across the desks of his office, and tries to jump out the window before being tackled by somebody else in his office.

It can be seen at about 3:36 in the following clip.

On Amazon Video, the subtitles just state "[SHOUTING IN JAPANESE]" (which really doesn't make much sense considering the name of the character is "Hong Kong Businessman").

What is the translation of what the Hong Kong Businessman is shouting before he tries to jump out the window?

I have tried Googling several things, I've also tried looking up the movie script, but to no avail. Unfortunately, I'm just not seeing any answers to this question.

I was able to contact David Forman ("Hong Kong Businessman") himself: 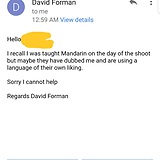 I showed this to several people fluent in Mandarin and they were unable to comprehend what he said, so it looks like this was overdubbed.

If you look in the extras of the Blu-ray, it shows what the actor actually said. Phonetically:

Translated by a native speaker that is not me, but is absolutely trusted.

Not the answer you're looking for? Browse other questions tagged translation ready-player-one-2018 or ask your own question.

11
What bits were cut out of Jules Verne's "The Mysterious Island" for the Kingston translation?
8
What does Frodo say when he pulls out the phial?