Are there any clear predecessors to the idea from Harry Potter of wands with special cores?

It now seems like a common idea, perhaps one with a long reaching tradition. But my Google results seem to be solely dominated by Harry Potter references. I've found references to wands with different things affixed to them like crystals or the like, but is Harry Potter really the originator of the idea of wands with special, magical cores?

There is mention of this practice in Ancient Egyptian mythology referring to various scepters (two of them often seen in depictions of Pharaohs holding them). Many of these were composed of multiple layers of ivory, gold, limestone and other materials.

As requested, here's an example for a Pharaoh pretty much everyone knows: Tutankhamen. In his tomb, a gilded Sekhem scepter was found, as shown here. This scepter is made from sheet gold with wooden core inlaid with semi-precious stones.

The Sekhem (associated with the god Anubis) and Was scepters (associated with both Seth and Anubis) are symbols of power worn by Pharaohs from the earliest dynasties up to the time of Cleopatra, so many other examples exist. The holding of the scepters is ubiquitous in movies about Ancient Egypt, as shown here.

The construction of scepters in Ancient Egypt was done by strict rules according to Heka magic. Heka is both the name for magic and the name of the god that personifies magic.

Contrary to the suggestion in the comments, there was nothing "mundane" about the layering, and it's certainly not due to a lack of gold (just think of all the solid gold items found in Tutankhamen's tomb).

According to Heka, certain types of wood and other materials had magical properties. It is not difficult to understand why this was thought to be: wood only grows on the banks of the Nile and nowhere else in the vast domain that was Upper & Lower Ancient Egypt.

Heka is the oldest form of documented magic with a considerable volume of texts that survived both the Greek and Roman occupation, and is the basis for Khemetic (Khemet = Greek for Egypt) Wicca in Western Europe. As requested, here is an excerpt of a funerary magic text to create a Tet object, strongly associated with Osiris, ruler of the underworld and the judge of afterlife. It clearly describes the use of a sycamore wood core with golden body: 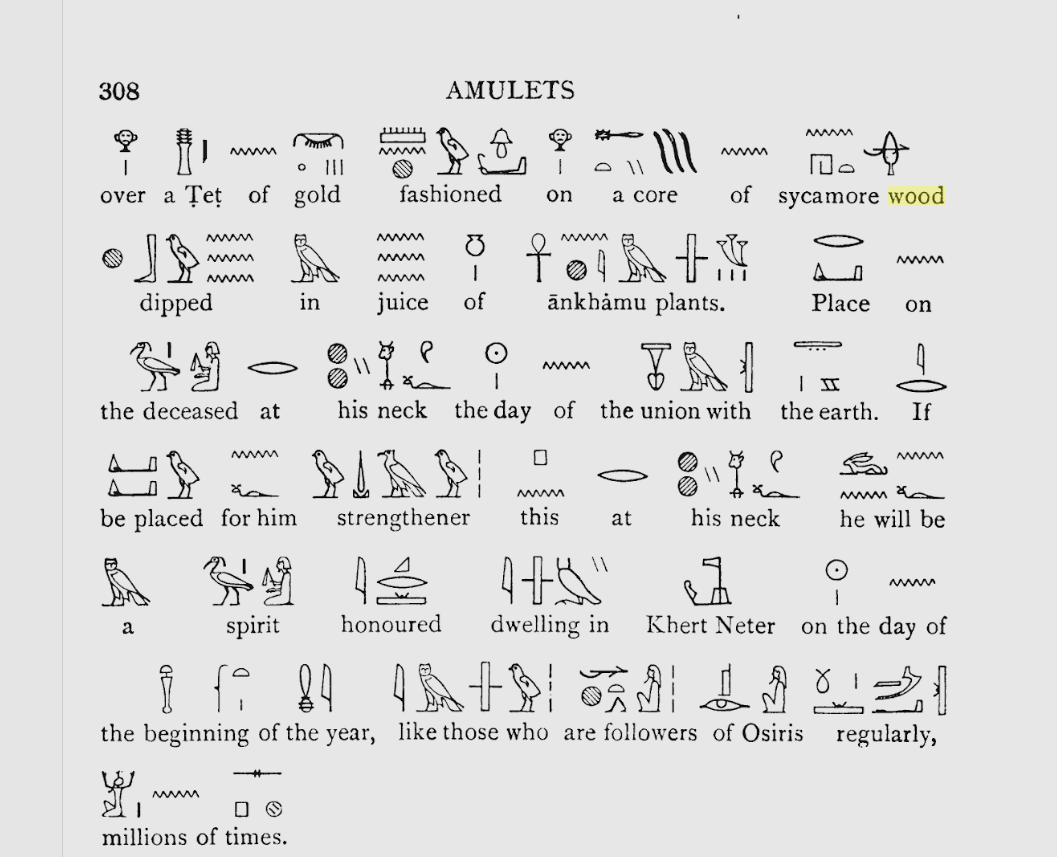 Even if we disregard this rather significant origin of magical layering, the idea isn't exclusive to JK Rowling novels. In Ultima Online, released in 1997, but the principle of crafting/imbuement was already present in the first alpha released in 1996, (so clearly before the publication of the first HP novel) there is the concept of cores to be harvested from monsters for imbuement.

Harry Potter is the first piece of fiction to do so. There are many references to material having special or magical properties, as the Egypt answer says there are also references to Scepters with multiple layers of material used to make them. However the combination of one magical material (in this case wood) with another used as the core (usually something from a magical animal) is a creative leap made by JK Rowling, most likely inspired by other sources.

This answer is here for if no sufficient counterexamples are made.

In Dungeons & Dragons, all magical items manufactured by wizards are required to be made from special components. For example, this is stated specifically in the Expert Rulebook (1983):

To create a magic item, the spell caster must first gather rare materials from which the item will be made. The DM should decide what is necessary. A scroll might require special parchment and a different formula of ink for each spell effect. Weapons might require rare metals, powdered gems forged into the metal, or the blood or skins of creatures to be specially affected by the weapon. These items should be difficult to obtain, and the spell caster will often have to adventure to acquire them, for there are no magic shops.

This includes magical wands as special cases. However, it should be noted that, in Dungeons & Dragons, wands are not general-purpose tools used for using magic; they are special-use items, which can each be used to produce only one (or, for particularly power wands, a small number of) magical effect, such as a lightning bolt, magical fear, or disintegration.

Not the answer you're looking for? Browse other questions tagged harry-potter history-of inspiration wandlore or ask your own question.

8
Where did the notion that Dragons could speak originate?
11
What was the first SFF work where magic (spells) had to be primarily channeled through wands?