Where did Dumbledore live while working at Hogwarts?

To me it seems like he would either live in the castle or somewhere near. I can't find any proof of either of those so any help would be appreciated.

Most likely in his office or in an adjacent chamber

In Philosopher's Stone, after finding out that Hagrid had told someone how to get past Fluffy, Harry and friends are looking for Dumbledore:

“We’ve got to go to Dumbledore,” said Harry. “Hagrid told that stranger how to get past Fluffy, and it was either Snape or Voldemort under that cloak — it must’ve been easy, once he’d got Hagrid drunk. I just hope Dumbledore believes us. Firenze might back us up if Bane doesn’t stop him. Where’s Dumbledore’s office?”

They looked around, as if hoping to see a sign pointing them in the right direction. They had never been told where Dumbledore lived, nor did they know anyone who had been sent to see him.

We find the same comparison made by the narrator in Chamber of Secrets when Professor McGonagall takes Harry to Dumbledore's office:

He knew now where he was being taken. This must be where Dumbledore lived.

It seems reasonable that in general the teachers lived in their offices. They are known to be at Hogwarts at nights and they are there throughout the year, and no other staff living quarters are mentioned in the books. Indeed evidence of them living in their offices can be found. For instance, When Harry and Ron confront Professor Lockhart in his office at the end of Chamber of Secrets they find him packing up his stuff to run away:

His office had been almost completely stripped. Two large trunks stood open on the floor. Robes, jade- green, lilac, midnight-blue, had been hastily folded into one of them; books were jumbled untidily into the other. The photographs that had covered the walls were now crammed into boxes on the desk.

That all his things, including various sets of clothing, seem to be in his office would indicate that that is where he lives during the school year. In fact, when Harry visits that office three years later in Order of the Phoenix he reminisces about Lockhart, and Lockhart is expressly described as "living" there:

In the days when Gilderoy Lockhart had lived here it had been plastered in beaming portraits of its owner.

It also seems apparent that Professor Slughorn sleeps in his office, as he was there apparently just woken up when Harry brought Ron there to cure his love potion:

Harry had been slightly worried that Slughorn might be at breakfast, but he answered his office door at the first knock, wearing a green velvet dressing gown and matching nightcap and looking rather bleary-eyed.

Similarly it seems that Professor Moody sleeps in his office, as evidenced in Goblet of Fire when the protagonists want to ask him if he found Mr. Crouch:

“D’you think it’s too early to go and see Professor Moody?” Hermione said as they went down the spiral staircase.

“Yes,” said Harry. “He’d probably blast us through the door if we wake him at the crack of dawn; he’ll think we’re trying to attack him while he’s asleep. Let’s give it till break.”

However, we don't necessarily know where in the offices they sleep. We don't ever find any sleeping facilities in the offices we see. Moreover, in Goblet of Fire Moody breaks into Snape's office at night and it is somewhat implied that Snape sleeps elsewhere. We can presume that Snape had already retired for the night because:

He was wearing a long gray nightshirt and he looked livid.

Yet he seems to have been somewhere other than his office (my emphasis):

“Of course not,” Snape snapped. “I heard banging and wailing — ”

“ — and when I passed my office, I saw that the torches were lit and a cupboard door was ajar! Somebody has been searching it!”

There is, however, one passage that could be read as implying that Dumbledore's living quarters were not in (or off of) his office. In Half-Blood Prince when Harry returns to Gryffindor Tower after he got the memory from Slughorn, he finds out that Dumbledore had just returned to the castle (my emphasis):

“Fantastic,” said Harry bitterly, looking around at the hard floor. “Really brilliant. Yeah, I would go and take it up with Dumbledore if he was here, because he”s the one who wanted me to –” “He is here,” said a voice behind Harry. “Professor Dumbledore returned to the school an hour ago.”

Nearly Headless Nick was gliding towards Harry, his head wobbling as usual upon his ruff.

“I had it from the Bloody Baron, who saw him arrive,” said Nick. “He appeared, according to the Baron, to be in good spirits, though a little tired, of course.”

“Where is he?” said Harry, his heart leaping.

“Oh, groaning and clanking up on the Astronomy Tower, it”s a favourite pastime of his –”

“Not the Bloody Baron, Dumbledore!”

“Oh – in his office,” said Nick. “I believe, from what the Baron said, that he had business to attend to before turning in –”

Dumbledore would have lived at Hogwarts during the school year.

The movie set had built and placed Dumbledore’s bedroom behind his office desk, behind his chair. 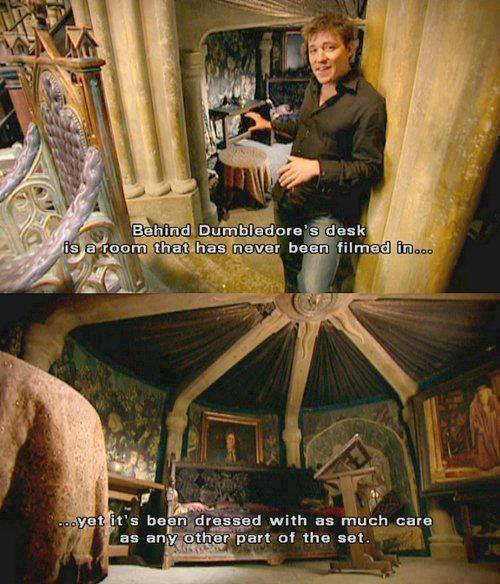 This diagram seems to show how his bedroom connects to his office, while his office still remains circular in appearance. (His bedroom looks to be on the bottom right.) 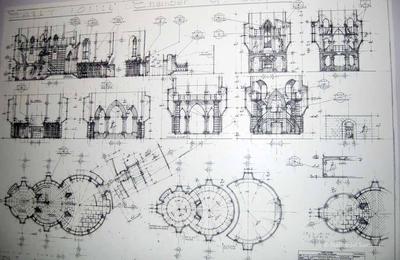 The green velvet near the top of his bedroom is visible in this picture of him in his office. 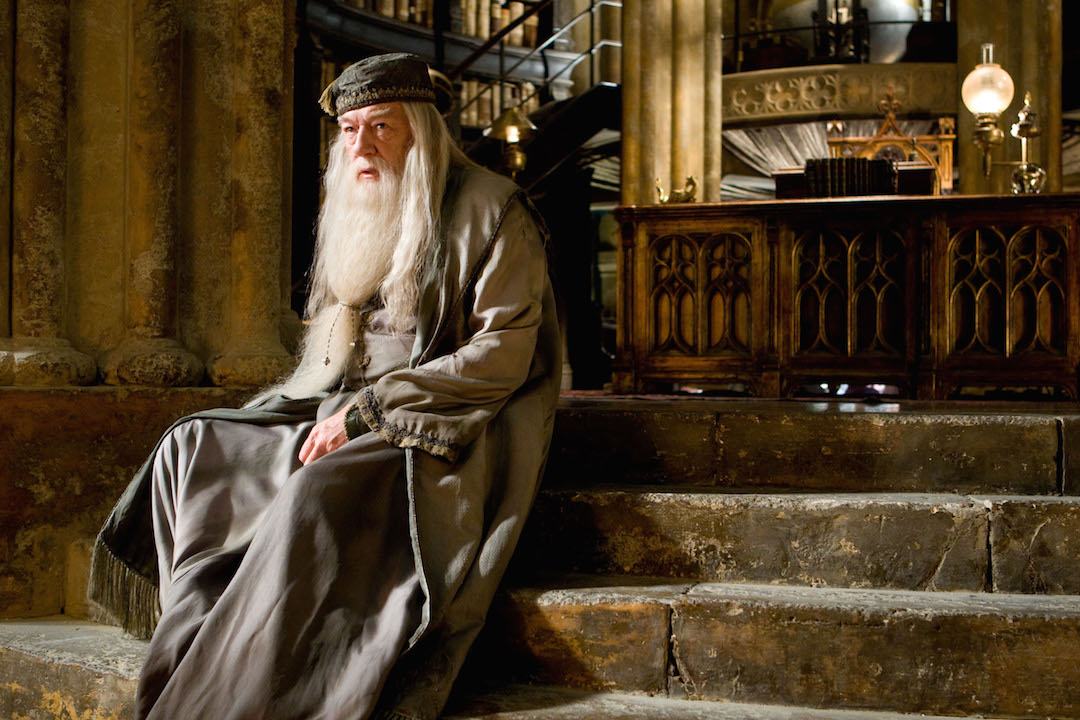 This seems consistent with the information in the books, as well. The teachers all seem to live in Hogwarts during the school year. Dumbledore himself is seen in his sleeping wear when he helps move Colin Creevey after he’s Petrified, so he’d been prepared for bed when he realized there was an emergency and he was needed to help.

“Next moment, Dumbledore was backing into the dormitory, wearing a long woolly dressing gown and a nightcap. He was carrying one end of what looked like a statue.”
- Harry Potter and the Chamber of Secrets, Chapter 10 (The Rogue Bludger)

The emergency wasn’t the reason he was at Hogwarts, though. He’d actually just been on his way downstairs for hot chocolate and found out about Colin’s being Petrified by chance, which seems to indicate he was living in Hogwarts. He was trying to get a snack in the middle of the night, which he wouldn’t be doing if he’d gone somewhere else to sleep and only returned in emergencies when he’d be needed. If he lived somewhere else, then he’d get himself late-night drinks there as well rather than returning to Hogwarts just to get himself hot chocolate.

“Yes,’ said Professor McGonagall. ‘But I shudder to think … If Albus hadn’t been on the way downstairs for hot chocolate, who knows what might have …”
- Harry Potter and the Chamber of Secrets, Chapter 10 (The Rogue Bludger)

This shows that Dumbledore’s living quarters would be upstairs from the kitchen, since he was going downstairs for his hot chocolate, which presumably he’d be getting from the Hogwarts kitchens. Where exactly his bedroom is, though, isn’t really clear, since Hogwarts is large and many things are above the kitchens. A possibility is that it could be in the same tower as his office.

“The painted image of Phineas Nigellus Black was able to flit between his portrait in Grimmauld Place and the one that hung in the Headmaster’s office at Hogwarts: the circular tower-top room where Snape was no doubt sitting right now, in triumphant possession of Dumbledore’s collection of delicate, silver magical instruments, the stone Pensieve, the Sorting Hat and, unless it had been moved elsewhere, the sword of Gryffindor.”
- Harry Potter and the Deathly Hallows, Chapter 12 (Magic is Might)

Though the staff does seem to all live in Hogwarts during the school year, there’s not much detail given on where exactly their bedrooms are in the castle, since Harry doesn’t see where his teachers sleep. However, a JKR Pottermore writing says McGonagall lived in Hogwarts itself as well for some of the time she worked there, and further goes on to describe her quarters a bit more.

Minerva could not bear to remain alone in their cottage, but packed her things after Elphinstone’s funeral and returned to her sparse stone-floored bedroom in Hogwarts Castle, accessible through a concealed door in the wall of her first-floor study.
- Professor McGonagall (Pottermore)

Dumbledore could have had a similar arrangement, with his living quarters somewhere inside the castle itself, perhaps hidden away somehow like McGonagall’s were. (When he was younger, Harry suspected he lived in his office, but there’s nothing suggesting this is actually true - his office didn’t seem equipped for living in. However, his living quarters may have been accessible through it.)

91
Where do teachers sleep at Hogwarts?
74
How did Molly Weasley make sauce out of nothing if Gamp's Law states that this is impossible?