80s cartoon about a boy stranded on a planet

I remember a strange science-fiction cartoon movie I watched as a kid (80s).

It's about a boy in a starship who, after losing his parents in an accident in space, lands on an planet, where he's raised by the native aliens. When he grows up, he finds his starship and is helped by the board computer to remember his parents, after which he leaves the planet.

At some point after leaving the planet I think he also meets somebody in a kind of medieval armor.

It should be European (I think French or from East Europe), but it's neither Fantastic Planet (La Planète sauvage) nor The Masters of Time (Les maîtres du temps).

Some other info I can remember:

After some research, I could find something about this animated movie. 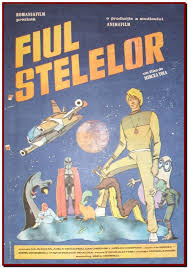 There is a Facebook page about it, but if you look for "ultima misiune" on YouTube it is possible to find some clips as well.