I'm trying to find an Uncle Scrooge story where he has some substance that converts liquids into a gel-like solids and at the same time reduces their volume significantly.

He uses one drop of this substance to make a tanker's volume of oil into a gel which can be transported by a small ship. I believe he also solidified the sea to get lost treasures.

This gel can be cut and they gang cut water like salami for demonstration! I've read it in Greek btw.

This story was first published as "Zio paperone e l'acqua concentrata" in 1977 [3]. It was written by Giorgio Pezzin and drawn by Giorgio Cavazzano [4]. I remember the story and can verify your description, but see also [4,5] for a short italian-language description of the story. 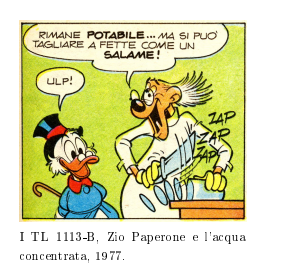 Translation: "It remains drinkable, but you can also slice it like a salami"

As you can guess from the names of the creators, this story came from the "italian school" of Disney stories. They had artists with distinct drawing styles, their own story themes, typically "fantastic" rather than slice-of-life and a slightly different set of recurring characters than the US comics. For instance, they frequently used the US character "John D. Rockerduck" and their own invention "Paperinik", which is a Donald Duck version of Batman. (The character was later retconned into a future-duckburg relying heavily on elements borrowed from anime) See [5] for more on Italian disney comics.

In Norway and possibly elsewhere, the Italian comics were serialized in thick pocket books while the US comics went into a larger format weekly magazine. The story in question was published in the Norwegian Donald Pocket No. 70 in 1986, with the title "Mettende vann", translating as "hearty/filling water". The original italian title translates as "Uncle Scrooge and the concentrated water" but I'm unable to determine the official english title. 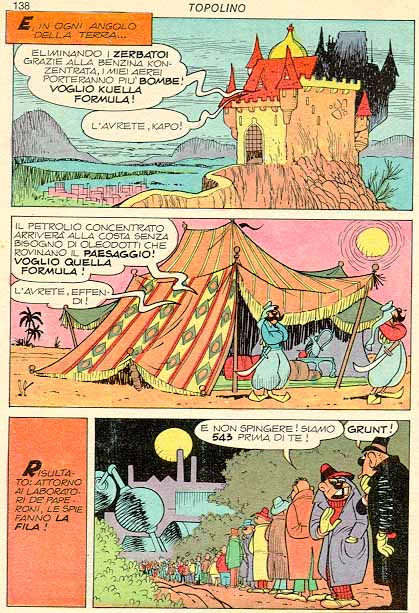 Second panel: "concentrated oil can be transported without pipelines!"

[3] I'm grateful for Francesco Stajano to include the source of the picture in his review of Pezzin's work: https://www.cl.cam.ac.uk/~fms27/disney/2009-stajano-pezzin-saggio.pdf

[5] Francesco Stajano has also written in english about italian disney, including the story in question: https://www.scribd.com/document/30748070/disney-comics-from-Italy

12
Identify book where murdering antagonist uses FTL communication to bypass 3-implant-per-person limit
0
Identify a comic where The Stranger's mid-section disappears
2
Identify a comic where Bruce Wayne did not change to Batman throughout the issue
34
Identify a comic where Scrooge McDuck was protected against a beam because he went swimming in his money
8
Old Mickey Mouse comic where Mickey thwarts a bank robbery by making the building fall into a giant hole in the ground
8
Comic where Scrooge McDuck or Donald Duck is facing a chess player that never loses
10
Comic story arc/issue where Deadpool is eaten by zombies and the zombies all turn into Deadpool clones
10
Comic book with a crossbow that fired a 'bolt' that unfolds mid-air into a horizontal sword/knife-like projectile
4
90's (?) fantasy novel where character uses blue ley lines to transform into dragon