I read this book roughly 4 years ago, and got it from a library. The sequel was actually about to come out when I had finished the book, but I never got to read it.
I don't think it was old enough to be made in the 90's. I remember thinking it was quite new, not a "classic" yet so I didn't expect much of it. The story felt Wizard of Oz-esque.

The girl, I believe her name was similar to Alice (maybe a spelling variation) was living in this type of small, electronic home. The robot maid took care of her, but she really wanted to leave to the outside world and try to find other humans. I think what happened was an alien creature came and tried to raid their hut, and possibly damaged the robot. She ended up leaving with the robot after that with an alien companion. The alien was akin to the Gungans from Star Wars, though that could solely just be my memory and how I imagined them.

The main points I remember is that the robot gives her a chip in her throat to speak to aliens (technology!), but she needed to be in close proximity to the robot for it to work. She thought the robot died, and she couldn't understand anyone after that, but then all of a sudden she started to understand people again and the robot returned!
Also she carried around a slip of paper that was slightly burnt and illegible save for a few letters, and at the end, she reaches a library that had the same paper on a book that was The Wizard of Oz (or some variation of it) even though the entire time I thought it was going to be Alice in Wonderland.

The sequel, from the snippet at the end, was about a colorfully haired human boy coming from the sky to "return her to her people".

The Search for WondLa by Tony DiTerlizzi 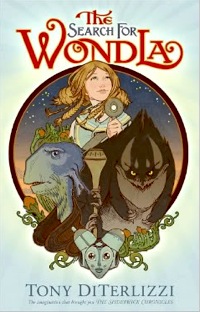 Eva Nine had never seen the actual sun before, or walked outdoors. In fact, she had never even seen another living person in all twelve years of her life. That changes when a marauding huntsman destroys her underground home and sends her fleeing for her life. She is desperate to find someone else who is like her, and a single clue gives her hope: a crumbling picture of a girl, a robot, an adult, and the word "WondLa".

5
Young adult book about a girl pulled through a mirror by her soulmate
13
Young adult book about 5 girls with superpowers
11
Book about young girl who got injured and was remade in a robot body without her knowledge?
8
Identify story about girl on alien planet with western feel
4
Book about a girl raised by a robot
7
80s/90s Teen Sci fi novel - Girl with robot named Kilimanjaro, travels to a space station orbiting Earth
10
Young adult novel about a boy and girl who could see through each other's eyes