I don't know exactly when it came out but it had the drawing style of a 90s cartoon.

There are 2 main characters with mechs, 1 male and 1 female. They both have suits and the 2 suits can merge into a more powerful one.

I remember one episode where the girl was at school and the boy had to protect everyone from a pterodactyl-like creature, where he needed to merge with the other mech to defeat it. Eventually, the female gets her mech and they merge.

They continue to fight till the mech has to run from a second creature when the person who sent the pterodactyl tells it to aim fire at the mech’s shins. The shins eventually fail so they can't run but they turn the knees into wheels (or something I don't remember as much about this part) beat the monsters and return to base.

I remember the way they enter the mechs is they suit up in a basic suit like a pilot would wear. Then get on a circular platform that would go down a tube and halfway though they would say 2-3 words the tunnel would end in the mech then the mech would sorta launch/shoot out of a tunnel.

It's Magne Robo Gakeen, I found it after going through a lot of Wikipedia.

Doctor Kazuki, who perceived of an invasion of Earth by the Izaru people builds a robot based on the science of magnetism and sphere joint theory. Undergoing a dangerous augmentation process, Doctor Kazuki's daughter Mai becomes the pilot of "Mighty" or "Magnetman Minus". Takeru Hojo becomes the pilot of "Puraiza" or "Magnetman Plus". The pilots would hold each other and then physically transform their joint bodies in a metallic plate locking itself on the Gakeen (Short for "Gathering Keen") robot's frame thus enabling the super robot to move and fight. 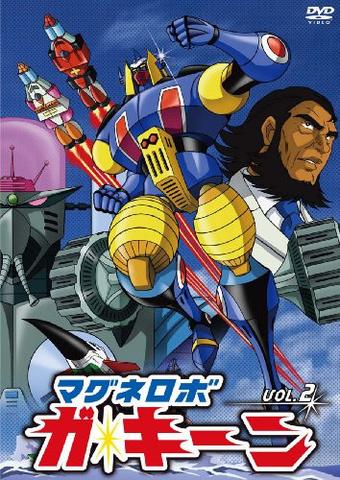 Not the answer you're looking for? Browse other questions tagged story-identification cartoon mecha or ask your own question.

11
Fantasy novel, traversing a tunnel, having to crawl for days?
6
1980s sci-fi anime series with invading aliens, mech suits, tanks and more
4
Looking for Anime with a prince faking being mentally handicapped hiding a giant mech suit wreaking havoc
10
Book where a boy and girl are transported into a fantasy video game
5
90s sci-fi cartoon with girl fighting robots on level 11
12
Looking for name of manga novel of boy that found exosuit on dying alien and it has great power
5
80s mecha anime about a boy and a girl with bunny ears
5
Cartoon in which a boy and girl travel with a robot
7
Mech fighting anime where the good guys deliberately lose