I belive I read this while I was living in Ohio between 2002 and 2006. It was a hardback novel with a dark cover. The basic story is set somewhere a few years into the future, with society not very different from our own except for the twist that a corporation offers a genetically engineered humanoid product that is similar to humans in appearance, but uplifted from non-human primates of some sort (maybe a mix of genes), and intellectually inferior to humans. I don't remember how exactly the protagonists get pulled into the plot, but they wind up in a fight for the rights of this engineered race. I remember there was a scene where they were investigating a seemingly deserted building and a light fixture fell on one of the investigators' heads, necessitating a medical visit, with the twist being that it's revealed they engineered the accident themselves, because the identity of the owner of the building was legally hidden, but filing an insurance claim gave them the leeway to make a request for the name.

The other two things I remember are a B-plot, featured at the beginning of chapters in the form of newspaper articles, indicating that some uplifted monkeys were in the wild in a nature preserve, and I think that the intelligence was heritable, and the big plot reveal:

The engineered race are actually humans who've been tweaked to be mentally degraded, not uplifted non-human primates.

I remember it as being on the library's "newly acquired" rack along with Lincoln Child's Utopia, so that would suggest that my timeframe is about right for it being around 2002, although it's a memory a decade and a half old, so take it with a grain of salt.

Could it be "Sims" by F. Paul Wilson? The publication timeframe matches the theme is spot on (but I don't recall if the twist ending you describe was used). And the cover was dark.

Just a few hundred genes separate humans from chimpanzees. Imagine someone altering the chimp genome, splicing in human genes to increase the size of the cranium, reduce the amount of body hair, and enable speech. What sort of creature would result?

Sims takes place in the very near future, when the science of genetics is fulfilling its vaunted potential. It's a world where dangerous or boring manual labor is gradually being transferred to "sims", genetically altered chimps who occupy a gray zone between simian and human. The chief innovator in this world is SimGen, which owns the patent on the sim genome and has begun leasing the creatures worldwide.

But SimGen is not quite what it seems. It has secrets . . . secrets beyond patents and proprietary processes . . . secrets it will go to any lengths to protect. 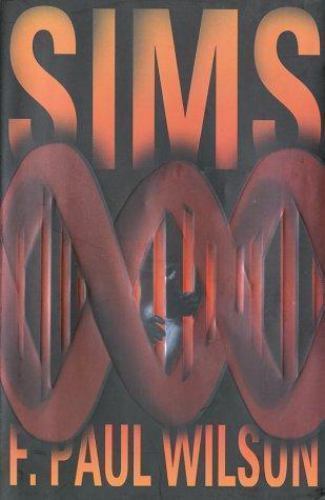 Not the answer you're looking for? Browse other questions tagged story-identification novel genetic-engineering uplift or ask your own question.