In the Star Trek universe, alien species are frequently seen working alongside humans, both aboard starships and Federation outposts. Memory Alpha lists close to 50 species that have been established as Federation crew on at least one of the series or movies. Realistically, one would expect some of these species to come from planets with climates, atmospheres or gravities at least somewhat different than Earth.

Yet I can't remember ever seeing a case where a crew member is ever shown needing any special accommodation for their particular physiologies. Have we ever seen a crew member with a special breathing apparatus, for example, or quarters kept at a significantly higher or lower temperature or humidity than normal? Can artificial gravity be adjusted for specific quarters?

I know we've seen these kinds of accommodations for guests on the Enterprise, such as traveling dignitaries, but is there any indication that Star Fleet ever makes these kinds of adjustments for their own staff? 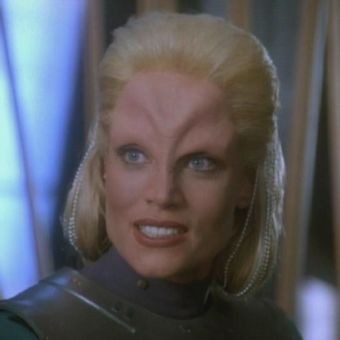 Her species evolved on a planet with extremely low gravity compared to Earth's and thus she would be unable to serve in Star Fleet without the use of a special exoskeleton or wheel chair.

Star Fleet accommodates her unique circumstances by installing a low gravity system in her quarters so that she can move about freely when she's not on duty.

Since you've mentioned breathing devices, we should probably give a shout out to Ensign Mendon from TNG: A Matter of Honor and cadet trainee Mordock from TNG: Coming of Age. Both Benzites use a chest-mounted breather to increase the levels of available oxygen.

You might also be interested to learn that Cadet Tilly (a human) has both special bedding and individual accommodation that her rank doesn't justify because of her allergies and snoring.

Michael: Why are you nervous?

Tilly: I'm trying to decide if I should tell you that you took my bed.

Tilly: I know, they look the same. But, um, I'm allergic to polyester, and viscoelastic polyurethane foam. It results in chronic snoring. This is why I wasn't supposed to have a roommate.

STD: Context is for Kings

A minor one: Starfleet uniforms normally include footwear. However, crewman Dax from Star Trek VI did not have to wear boots, because of his oversize webbed feet. 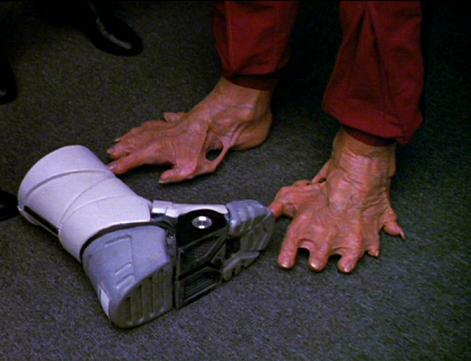 in Star Trek: The Original Series "The Deadly Years", several cast members are suffering from hyper rapid aging. In the sickbay:

SPOCK: I have a question for the doctor. (Kirk leaves) Doctor, the ship's temperature is increasingly uncomfortable for me. I've adjusted the environment in my quarters to one hundred twenty five degrees, which is at least tolerable. However, I

MCCOY: Well, I see I'm not going to be making any house calls on you.

SPOCK: I wondered if perhaps there was something which could lower my sensitivity to cold.

So Spock apparently functions in air that is over 50 degrees F cooler than he prefers, and more or less ignores the temperature difference, but when weakened by old age he turns the temperature in his cabin up at least 50 degrees higher than humans would prefer, and wishes he could turn it up higher.

When beaming down to a planet in an ice age in "Spock's Brain", Kirk orders:

That indicates that TOS era Starfleet uniforms have built in heaters (and maybe coolers) that can be set to produce different temperatures.

This indicates that in the era of TOS crew members can adjust the temperatures of their uniforms up (and maybe also down) to make themselves more comfortable, and crew members belonging to a species that is a minority among the crew may do so all the time.

And "The Deadly Years" shows that crew members can adjust the temperature in their cabins significantly higher (and possibly also lower) than that in the public areas of the ship.

In "Amok Time" Kirk has difficulty fighting in the thin air and high heat of Vulcan.

MCCOY: Is this Vulcan chivalry? The air's too hot and thin for Kirk. He's not used to it.

T'PAU: The air is the air. What can be done?

MCCOY: (holding up a hypo) I can compensate for the atmosphere and the temperature with this. At least it'll give Kirk a fighting chance.

MCCOY: You're going to have to kill him, Jim.

KIRK: Kill Spock? That's not what I came to Vulcan for, is it? What's that?

MCCOY: It's a tri-ox compound. It'll help you breathe. Now be careful!

So if a crew member finds the air on the Enterprise too thin compared to what he is used to, he may get regular injections of tri-ox or other compounds to boost his oxygen levels.

And I once read that there are machines that can raise or lower the oxygen content of the air in a room or building. I believe that they are used to help people from high altitudes function in low altitudes, and vice versa, and used by athletes to train for competitions.

I think that I haven even seen advertisements for a wearable breathing device to increase oxygen concentrations.

Breathing masks were worn once in TOS, on Gothos in "The Squire of Gothos", and the extremely small size of the air tank or air synthesizing machinery was very impressive.

So in the era of Star Trek it should be possible to adjust the atmospheric contents of crew members' cabins.

So it seems probable that crew members who are a minority species on their ship can do a lot to make themselves more comfortable despite the differing requirements of the majority species in the crew. But the precise details of what is available are not specified.

In addition to the many answers given, there are others:

NEELIX: We've only got four functioning lavatories for a ship of a hundred and fifty people....Needless to say, lines are beginning to form. If we don't get unstuck soon we may have a serious problem on our hands. Especially with the Bolians.

There appear to be cases where Starfleet does not, although our information (more so non-apocryphical information) is limited:

In ST I (maybe only in the production notes or in those for the canceled Phase II series), Deltans were said to have a "highly developed sexuality". Rather than somehow integrating that part of Lt. Ilia's culture (or even biology?), she immediately announced her "oath of celibacy" as being on record. There is no explicit mention that she is required to give such an oath, but if it is not, the necessity of the public announcement on the bridge is not clear, either.

In the Star Trek: New Frontier series of books, Brikars wore Gravity Assist devices to help them move around environments (ref on Memory Beta - They must wear gravity compensators in normal gravity, otherwise they'd be unable to move)

Lieutenant Melora Pazlar is an Elaysian wore her usual gravity assist device when moving around the ship. She was allowed to adjust the environment within her Stellar Cartography lab to allow her to move freely. Her quarters were also designed to have the same environment as her home planet.

Ensign Aili Lavena is a Pacifican that had an environmental suit for moving around the ship and had her quarters converted to be a water base like her home planet.

Conversation quote between Spock and Dr McCoy in ST:TOS - The Deadly Years

Spock: Doctor, ship's temperature is increasingly uncomfortable for me. I've adjusted the environment in my quarters to 125 degrees, which is at least tolerable. However, I...

McCoy: Well, I see I'm not gonna be making any house calls on YOU!

For other rooms on the ship.

In ST:TNG - Genesis episode Deanna Troi asks the computer to increase the temperature and humidity

(Troi is the Bridge Officer, and is shivering)

TROI: Worf, it's freezing in here.

WORF: You have already raised the temperature three times. It is too hot.

TROI: Live with it. Computer, execute my original command. (she finally can't stand it)

TROI: I need a bath. You have the Bridge.

I offer a particularly large example of accommodating non-humans in Star Fleet: the Intrepid ("The Immunity Syndrome")(ST:TOS) and the T'Kumbra ("Take Me Out to the Holosuite")(ST:DS9). Both of these ships had all-Vulcan crews. Starships with an environment of extreme dry heat and logic thick enough to slice.

I can only suspect that these two vessels weren't 100% Vulcan, but like all Star Fleet ships, had minority of other species mixed in the crew that need special arrangements.

And would there be a sufficient number of recruits from other Federation species to fully crew a starship? Something to imagine...

6
What species is Vilix'pran and what do we know about him?
10
Do Vulcans feel cold on Earth?

12
How could Star Fleet personnel operate non-Star fleet equipment or vessels?
0
Racial composition of Star Fleet
15
How does Star Trek bridge crew spend their time when on duty?
7
“Star Trek: The Next Generation” episode focusing on crew members below command level
11
When did 'Star Fleet' become 'Starfleet'?
6
Are there Star Fleet non-disclosure agreements for tests?
26
How do USS Enterprise Crew members receive emails or other forms of personal messages?
8
Are there accommodations in the turbolifts for mute persons?
1
What are crew members doing in the Jefferies Tube in “Timescape”?