Online post/short story, about potions that give you different powers

This was a post I read a few years ago (I can't remember which website). It was a typical quiz of "which power would you choose?", but someone took it to the next level and posted a short story that had 8 (or 6) characters who all chose one of the powers, and the story was pretty amazing IMO. The writing style was reminiscent of Wildbow's Worm.

The powers that were offered that I can remember were:

These are pretty foggy in my mind but that's what I remember.

More details about the story:

Does anyone remember this existing and knows how to find it?

Big huge thanks to Stackstuck's comment about the story.

I remember something like this. It was pills, not potions. Unfortunately, I don't have a link to it and I'm not 100% sure of the author. So I can't really help. I want to say Yudkowsky. But I doubt it.

He was right, it was pills and not potions and I found the post quickly after he mentioned it. It's called "...And I show you how deep the rabbit hole goes" by Scott Alexander, and can be read here.

Here is a picture of the original post with the powers that inspired the story: 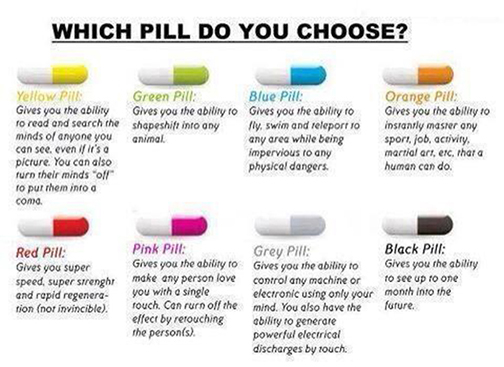 Quotes supporting the story bits mentioned in the question:

One night you’re in a bar drinking your sorrows away when a man comes up to your table. “Hey!” he says, “nice hair. Is it real? I’m the strongest person in the world.” He lifts your table over his head with one hand to demonstrate. You are immediately smitten by his BRUTE STRENGTH and ALPHA MALE BEHAVIOR. You must have him.

You are so delighted by your omniscience and your ability to make near-optimal choices that it takes almost a year before you realize the true extent of your power.

When you try this, you see yourself a month in the future, just finishing up writing a letter that reads as follows:

[omitting most of the letter here] I am sending this from the year 963,445,028,777,216 AD. […] The sky is black and without stars; the inevitable progress of entropy has reduced almost all mass and energy to unusable heat.

Black is unfazed. “With the help of Orange, who among his many other accomplishments is the current Pope, I have obtained the Shroud of Turin. A perfect photographic representation of Jesus Christ, created by some unknown technology in the first century. And Jesus, I am told, is an incarnation of God.”

[…] “[…] God must have made these pills, which means He must know how to do it. If we can read His mind, we can steal his secrets.”

This sounds a good bit like some installments of Gnome's Journal, a side link of Orc and Gnome's Mild Adventures web comic. Gnome (that's all the name he remembers) collects potions, and periodically includes them in his (illustrated) journal, along with what they do. Over the run of the comic (several months, so far), this comes to quite a collection of potion entries.

Not the answer you're looking for? Browse other questions tagged story-identification short-stories potions powers or ask your own question.

41
A story about a guy who gains admin access to the universe and starts copying things?

19
Identify this short story: Malfunctioning robot destroys anything that moves, man is injured by robot, shines light on robot
4
Online fantasy story about puzzles and a girl who remembers the future but not the past
7
What was that story about teen cousins who get mental powers from polluted water?
8
SF short story (Playboy-70's?) where a man with mental powers visits the President and is killed as he leaves
9
Online short story about two factions fighting with time as territory
5
Story about characters on a space station where chemicals purposefully give people specific psychoses
11
Online short story about a researcher who uploads his mind which becomes AI singularity