Around 2006 I watched an anime (movie) where this black haired boy goes to rescue this girl from a villain. I don’t remember the girl but I distinctly remember two scenes.

The first is while on his quest to find a boy he stops in a village to help some women work on some form of a press where they pushed with their feet.

The second is at the end where in the climax the boy defeats the villain which I think was a black mass/goo. He wins and there is a bright white light and then he embraces the girl.

This is a distorted recollection of Hayao Miyazaki's Princess Mononoke produced by Studio Ghibli.

The young man is Prince Ashitaka.

The young woman, is San, daughter of the wolf goddess Moro, often called by the sobriquet "Princess Mononoke".

The "women of the forge" are a group of former prostitutes who work the giant bellows in the main forge in Iron Town, which is a fortified iron-manufacturing village run by Lady Eboshi (who is a former pirate captain in backstory not appearing in the film).

The black mass/goo was not a villain, but the fatally-injured great forest spirit in one of his two forms, whom Ashitaka and San struggle to protect. This part is a bit of a simplification, as the nature of the "black goo" is learned slowly over the course of the film, beginning with its first scene. 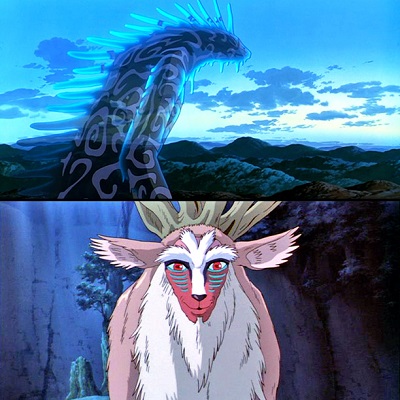 5
Anime movie about a boy in a ghost town
5
Book where boy/girl teleport/time travel with device that uses mobius strip
10
Trying to find an anime I watched in my childhood about samurai/swordsmen
12
Childrens fantasy, blind monk leading boy who can control the elements
10
Book where a boy and girl are transported into a fantasy video game
8
70's/80's anime where the heroes travel on a spaceship to rescue a princess
11
Sci-Fi/Fantasy Anime about a girl who turns into a world-destroyer
4
'80s anime where a boy is transported back in time to the Jurassic era, and a T-Rex is speared to death by a tribe