What was the original version of this FAQ answer on JK Rowling's website?

On J.K. Rowling's old website there is an FAQ question that reads as follows

As a vast number of people have pointed out to me in the last twenty four hours (some of them related to me by ties of blood) Colin DID develop a photograph from his camera in 'Chamber of Secrets' (my previous answer stated that he never did so).

Cameras, like radios (or, as the wizards call them 'wirelesses' – they're always a bit behind the times when it comes to Muggle technology) do exist in the wizarding world (there's a radio in the Weasleys' kitchen and we know there are cameras because of the moving photographs you see everywhere). Wizards do not need electricity to make these things work; they function by magic, but in the case of such objects the wizards liked the Muggle invention enough to appropriate the idea without adding cumbersome plugs/batteries.

I have an old notebook in which it says dev sol (potion) magic [indecipherable word] photos move. Adept as I am at interpreting my old scribbles, I can tell you that the original idea was that wizards would use a magical developing potion to make their photographs move.

SO... as Colin's batteries can't work in Hogwarts, clearly his camera is running off the magical atmosphere and he is then developing his photographs in the magical potion that causes the figures therein to move. All of which goes to show that Colin has a lot more initiative than I ever realised.

The poll question answer has also been queried, but I didn't get that one wrong – for details, see P.S.

I have learned something from this experience, which is that when you read through twenty chapters at a sitting, then decide to do some FAQs for the website in the early hours of the morning, you mess up. I'll make sure I'm a bit more alert for the next batch. 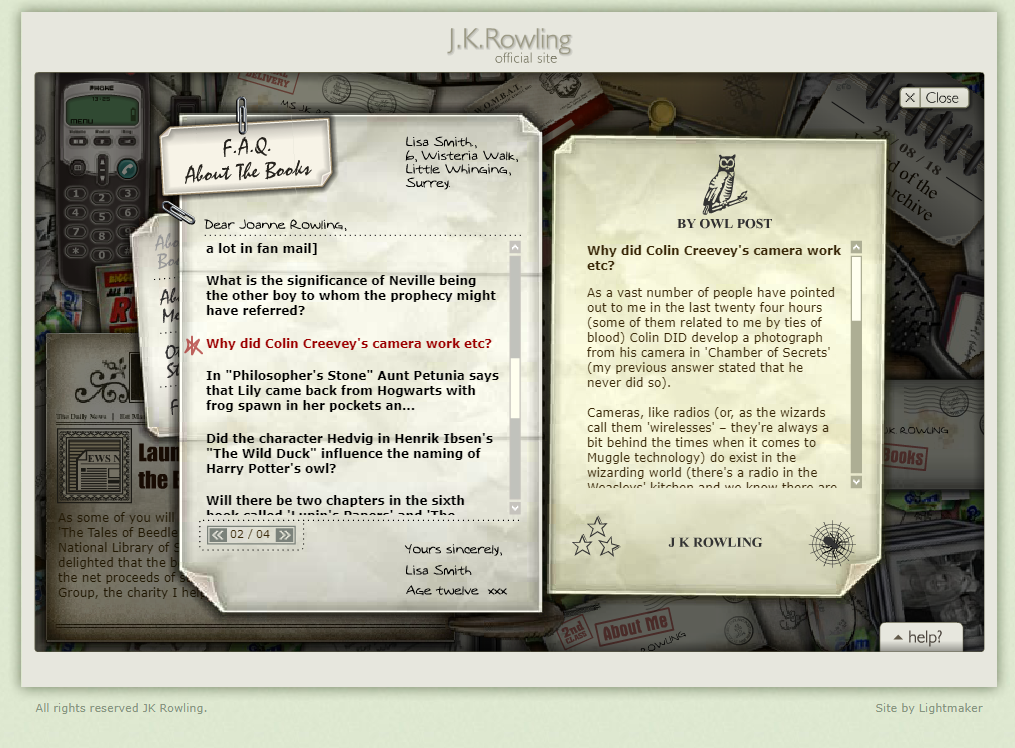 Archived link to question via the Wayback Machine

As can be seen by reading the JK Rowling's answer, it seems that this is replacing an earlier incorrect answer she had posted.

Looking through old forums confirms this and provides some dating. It seems that the original was posted on October 4th 2004 and that it was replaced the next day on October 5th 2004.

I spent a while looking for this, and I have been unable to locate a saved copy of the answer, other than as JKR says here, it had said Colin's camera was unable to develop pictures at Hogwarts.

What was the exact text of J.K. Rowling's original answer to the question?

There's (what looks like) an archive of all the original questions and answers from 4 October 2004 here. The same information is also copied/pasted here. According to that, it said:

How did Colin's camera work inside Hogwarts if it was a Muggle camera ("Chamber of Secrets")?

Who says it worked? Colin never got to develop the film, so he never knew whether he had taken pictures correctly or not. All we know is that the insides of the camera were scorched when the Basilisk looked into the lens.

(This took a while to find! A really tough question. I eventually got there by finding this old forum post, which contained the title of all the questions posted. The title of the original question was phrased differently, and a Google search of the verbatim question phrasing got me to that forum.)

12
Why Did Colin Creevey's Muggle Camera Work at Hogwarts?
9
Besides the Basilisk, What Kind of Magic Can Cause Someone to Be Petrified?
9
What were the W.O.M.B.A.T questions on Rowling's old site?
22
Can any magic besides the Sorcerer's Stone or Horcruxes delay death?
3
What potion do you need to develop pictures?
10
When was Professor McGonagall born?
5
What were the questions to Rowling's seven FAQ answers?
114
Why aren't Muggles extinct?
9
What was the original version of this post on JK Rowling's website?