90s sci-fi novel with two worlds, one grim another pastoral with the war-cry "Ire, Iron and 'voorstrod'"

I read this paperback sci-fi in the early nineties. I have a jumble of memories but not sure of the running order in the book.

Two worlds, one slave-owning, grim and brutal; the other pastoral but high-tech nucleus.

On the "grim world" they use the near-human natives as slaves and are very strict with them, the young human protagonist's mother, as a girl, witnesses her father whip her native playmate to death in the kitchen for not playing how she likes. The native's own mother (who works in the house) watches and somehow ensures the floor is forever stained in that area to remind them of her child.

Still on the grim world, they are descended from the IRA and Iranian terrorists and Afrikaaners and their slogans have got intermixed over centuries. The war cry (and mythical Gods) is "Ire, Iron and Voorstrod" (spelling?) but nobody remembers why. They are nowadays religious fanatics with their own strange creed. They boast about how they used to be able to make aircraft fall from the sky. They have a plot to conquer the pastoral planet.

On "pastoral world" they have a massive space station full of giant warbots held in stasis (Enforcement?) to keep the peace in their star colony area. These are regularly maintained by their tech people.

The young protagoninst has now found himself on the pastoral world (a refugee?) and is in love with a girl there. Suddenly an invasion begins - the grim people have managed to usurp control of the warbots and are sending them through wormholes along with troops.

The warbots question anyone they run into with religious questions but because of his upbringing, the protagonist easily answers and is released to later help overthrow the invaders.

It is Sheri S. Tepper's excellent novel Raising the Stones, first published in 1990. It is also the second book in the Arbai series, though a stand-alone novel rather than a sequel.

In this book she analyzes and criticizes religion through portrayals of several cultures with different religions, also including one obviously based on Judaism. The slogan is ‘Ire, Iron and Voorstod’.

This review on Goodreads by Kaitlin seems to describe a lot of similar plot points you mention.

This is largely set on two different planets: Hobbs land, and Voorstod. Hobbs Land is a farming community which was one the home of the Owlbright cultures but was abandoned by them and is now take over by the Hobbs food production company and various settlements made up of willing migrants who want to live a peaceful life. One of these people who has migrated to Hobbs Land is Marie Manone who moved from Voorstod with her young son Sam.
Voorstod is a brutal land which favours men over women and forbids the women from having a say, dressing how they wish or having any freedom. They also keep Gharm who are basically slaves that they conquered and brought with them to Voorstod. The Voorstlanders are not a group you would ever wish to come across as they believe they are working the name of their God and they do not care what other races think. They're brutal and they're allowed to be, and they even like it.
We also have other parts of the planets and the moon included as settings at some points. There's a Queen who has a territory bordering the Voorstod lands and she is most unhappy with their treatment of women and slaves and is doing what little she can to help escapees. We have a council who are based on the moon and oversee many of these planets and make the rules for some elements of their daily life.

Overall, this is mostly a book which focuses on the brutal nature of religion and how some religions are crafted by people to fit their own evil desires, whilst others will blossom and grow because they nourish the good sides of humanity and allow peaceful and happy lives. There's a lot of discussion throughout the book on the various ways that these religions (Voorstod and Hobbs Land) clash and how these two cultures would not be able to co-exist, and we also follow a sub-plot of Marie Manone who is trying to live freely on Hobbs land, but the people of Voorstod want her back and are willing to stop at nothing to convince her to return... 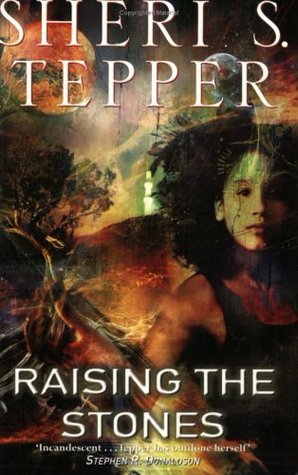 8
Book set on an alien planet with a symbiotic plantlife

9
Series of novels about two continents, one technological and one magical, at war over resources.
14
Book, portal to a parallel world, secret police in crow masks rule
13
Fantasy novel with two dream-like worlds, one good and one bad
14
Book trilogy where adults walk towards towers involuntarily at a certain age
19
Old kids show from the 80's about two kids with a magical compass that took them to another world
6
A book involving a child with missing mother, transported to magical world/forest & comes across a harpy
20
Two brothers war against one another: Magic vs. Technology