TV series: girl becomes a mermaid by rubbing a gel on her legs, brother grows into a man in one day

I remember watching a TV show where there's a family consisting of a father, mother, elder daughter and a son. The intro of the show is like any other intro just showing them and their names and some scenes from the show like some alien/robot shoots some green stuff at him and he jumps behind the couch. I watched it between 2002-2005.

I remember only two scenarios from the show:

I think it was from Disney, but I'm not sure.

In the intro the show name pops out with mostly green colour with some cartoon characters on top or something (vague).

It was a real show, not reality show. I think it might have the Micky Mouse and Goofy on its name logo. Not sure.

I believe this is the TV series Honey, I Shrunk the Kids; based on the movie of the same name. In this fun series, the family got into all sorts of trouble because of the dad's inventions. In one episode, "Honey, She's Like a Fish Out of Water", the daughter, Amy, is turned into a mermaid by a lotion invented by her father. From IMDb's summary:

Wayne creates a skin lotion to make people become great swimmers like fish in the water. Amy takes some of it to a pool party that she is invited to. When Amy uses the lotion, she becomes the life of the pool party so the girl who the party is being held for tries it as well. However, things go terribly wrong (as usual) when the girls find the lotion has turned them into "mermaids". They'll end up completely turning into fish unless Wayne can create an antidote. However, things get even worse when the desperate and greedy owner of the pool kidnaps the girls to use them as a money-making attraction.

The robotic episode is "Honey, Growing Up Is Hard to Do":

Nick wants to appear on a show called Smart Mouth because he believes he knows everything. Everyone tells him that he is too young so Nick makes a chemical which accelerates his aging process, turning him into a grown man overnight. But his parents eventually create an antidote so now they must convince Nick to go back to normal or he will be a grown up forever.

This episode introduces Animatronic Nick, which has a uncanny resemblence to Nick Szalinski. with the exception that only its face and hands look normal and the rest of his body is robotic. 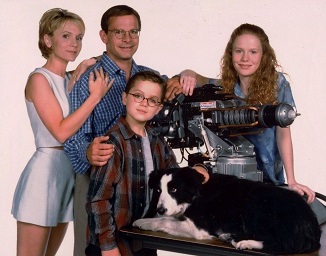 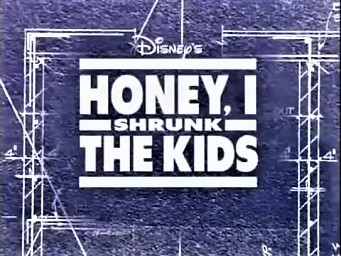 The description makes me think of the 1990 TV adaptation of Maniac Mansion.

While Maniac Mansion primarily derives its storylines from typical sitcom fare such as family life and parent-child relationships, the series incorporated several prominent elements of science fiction. Fred Edison is a scientist who works out of his basement laboratory which is partially powered by a mysterious extraterrestrial meteorite, and many episodes revolve around Fred's outlandish and occasionally disastrous experiments and inventions. As it is revealed in the series premiere, a mishap with one of these inventions caused genetic mutations in two of the main characters, Turner Edison and Harry Orca, in a parody of the 1986 film The Fly: for the complete run of the series, toddler Turner is a fully-grown man with the mind of a child and Harry Orca is a normal-sized housefly with a human head (similar to the 1958 version of The Fly).

13
A TV Movie where a guy turns into a cyborg?
12
90's talking computer children's tv science fiction series
4
Goofy looking alien robots lose a "Kleptonite Ball" towed behind their spacecraft
9
Name of an English-dubbed Japanese show about a man who became a giant robot
19
Trying to identify a short story about Disney characters in a post-apocalyptic world
5
80s/90's Robot cartoon, one like a Transformer
2
Webcomic with a mermaid and a bird legged android?
2
Cartoon about 2 guys (one named Sam) and a girl
4
group of girls travel through a portal with individual paperweight things that act like keys
5
Animated TV show with magic gloves