Growing up in the late 70's and early 80's, I had this "photobook" of alien worlds. It was basically a collection of artwork with a short description of each world. It was a hardcover, but probably was less than 25 pages long.

I only remember one of the pictures was of an abandoned world. The rest were thriving alien civilizations. I'm sure there was some overarching premise to tie everything together, but I don't really remember what it was.

The style was definitely more modern than most of the scifi artwork I had back then. Therefor I believe the book was published sometime in the 1970's or early 1980's.

It's possible this could be one of the Terran Trade Authority books. The publishing dates coincide with your period of ownership. They consist of one page being a full colour illustration, usually of a spaceship or space battle and an accompanying page of text describing the uses and specifications of the featured ship.

There was a spin off series called Galactic Encounters which followed a similar format and featured images of cities, planets and aliens. It's hard to say for certain from your description but I believe what you are describing might be one of these. The covers can be found on Goodreads, you can check these out to see if any of these jogs your memory. yle you remember.

Another possibility is one of my favourite childhood books, Galactic Tours: Thomas Cook Out of This World Holidays: 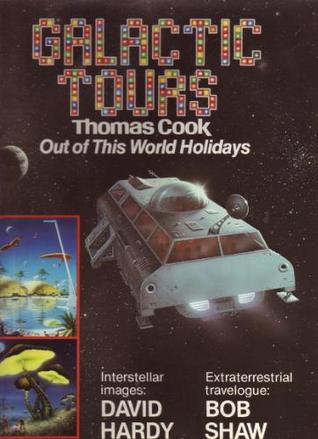 I seem to remember one destination being a pre-lightspeed travel colony vessel, a generation ship, whose story was about how the pioneers arrived at a planet already colonised by people who had travelled there faster-than-light. That was the first time I seen that particular story, but there were lots of little vignettes like that.

The final destination was a planet with a star gate, which appeared to be take you to planets in other galaxies. However, all of the civilisations they found through the gates were abandoned, so they had decided not to start running tours through the gate yet.

9
What was that Sci-fi book mixing classic art and book excerpts to build a timeline of the universe?

13
A children's science fiction short story collection from the 1980's
5
Book Identification about a giant spaceship
20
1970's- 1980's children's SF anthology (British?) identification
16
Fictional graphical "history" of spaceflight book from early 1980's that covers the years 2000-2100
26
Short comic about alien explorers visiting an abandoned world with giant statues that turn out to be alive but move very slowly
4
YA sci-fi book where an empathic (or color changing) alien befriends a young girl