Why does the Nova Corps list Gamora as the last of her species?

In Guardians of the Galaxy we see Gamora's rap sheet say 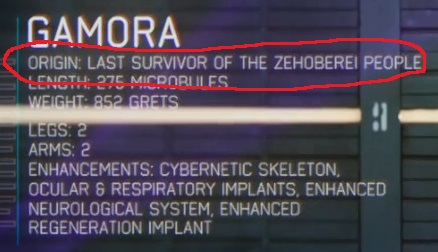 However, in Avengers: Infinity War Thanos says to Gamora

Gamora: I was a child when you took me.
Thanos: I saved you.
Gamora: No. No. We were happy on my home planet.
Thanos: Going to bed hungry, scrounging for scraps. Your planet was on the brink of collapse. I'm the one who stopped that. Do you know what's happened since then? The children born have known nothing but full bellies and clear skies. It's a paradise.

Since Gamora's people are still alive, why does Nova Corps have on record that she's the last?

No explanation is given for this discrepancy. Given that Thanos is in possession of the Space and Mind stones (granting him what essentially amounts to near-omniscience) and given that he's a pretty honourable guy (in his own twisted way) it seems unlikely that he's lying to Gamora.

That being said, it seems more likely that the Nova Corp's records about Gamora's home planet are simply incorrect. If they're not in regular contact with her planet then they may be relying on secondary sources of information that she hasn't bothered to put right.

We may now know what director James Gunn was referring to in an interview he gave prior to the film's release. He and the VFX team apparently used information from the comics (in which Gamora's planet was destroyed by Adam Warlock) when they wrote the text for the mugshots, not realising that this would conflict with a later plot-point that he wanted to make.

“I’m writing Guardians of the Galaxy Vol. 3 and I finished the first draft of the treatment yesterday. I’m excited about it. I feel really great about it. But there’s one little thing that I had in the first movie. Now, Marvel Canon – MCU – is crazy. There’s the 616 universe which is the Marvel Comics Universe, which people get hung up on that canon, and then there’s the MCU, The Marvel Cinematic Universe, which has a separate canon (inspired by but not exactly the same as the 616.) I did something in the first movie of Guardians where it was in the background but it was distinctly there, and people know that it’s there. And I’m like goddammit. Because I have a really good storytelling reason for breaking the canon, and I stayed up last night figuring out if I’m gonna do it or not. I still don’t know.”

“I’ll actually tell ya. In the first movie there is the mugshot sequence where the characters go through and they’re going through the mugshots and having their picture taken. And the Nova Corps has information about each of the characters coming up on their machinery. Those things are something that your average viewer doesn’t see at all. But there’s a lot of background I put into those things about who they’ve worked with, where they are from, what’s going on. And it’s one of those things that I’m thinking about changing.”

Not the answer you're looking for? Browse other questions tagged marvel marvel-cinematic-universe avengers-infinity-war guardians-of-the-galaxy-1 or ask your own question.

12
Why do the Xandarians/Nova Corps look human?
14
What does Groot's last line mean in The Guardians of the Galaxy (movie)?
6
Why does Cosmo need the space suit in Guardian of the Galaxy?
9
Why didn't Gamora collect the Orb for the Collector?
6
Does Gamora have a bounty on her head?
9
How does Gamora know the location of this object?
5
Why does Thanos using the Time Stone look like Doctor Strange using it?
20
Why does snapping your fingers activate the Infinity Gauntlet?
4
Was Xandar aware that Thanos was responsible for the extermination at Zen-Whoberi?
25
Why does it say "Skywalker" in this shot of Bradley Cooper recording the voice of Rocket Racoon?