Is lavabending hereditary in the Avatar universe? 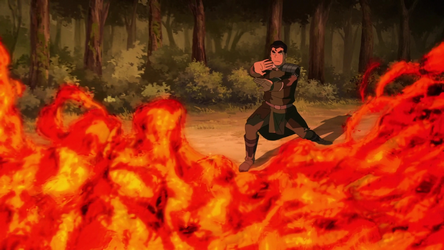 Do you guys think that in order for someone to lavabend they need to have both earth kingdom and fire nation heritage or be an Avatar in order to do it?

Probably not, but it is a distinct possibility.

As far as we know Ghazan (the lava bender of the red-lotus) is pure earth nation, meaning probably not. That being said it's possible that he does have some fire nation ancestry without knowing it.

It's worth noting that avatars seem capable of lava bending. This doesn't necessarily mean however that they use both fire & earth bending to accomplish this however it could simply be due to the avatars detailed understanding & high skill with bending.

Lava is also simply another state of earth. We see that water benders are capable of fluidly transitioning between Ice and Water with ease so it stands to reason that earth benders should be able to do the same (though it would be harder due to the greater temperature difference simply requiring more energy.).

In my personal opinion (though this is in no way cannon at all) lava-bending probably requires cross-discipline knowledge, much in the same way that lighting-redirection is based on a water-benders understanding of ebb and flow lava bending probably requires a fire-benders understanding of passion and energy but no actual "fire bender genes" the avatars all obviously have this, Bolin gets it from training with his brother and zaheer gets it from studying with the red lotus.

I don't think Lava Bending is, but innovation or ground-breaking may be. Between The Last Airbender and Legend of Korra, we see how previously specialized techniques become nearly ubiquitous within a single long lifetime or just two generations. Chi-Blocking, Lightning Bending, Metal Bending, etc. We see that nearly every exceptional type of bending is replicable: Combustion, Flight, Lava Bending, Blood Bending, etc.

The show even goes so far as to show those who couldn't bend before can be imparted with the ability to bend, going as far back as the City-State Lion-Turtles giving bending to humanity (such as Wan), Korra returning such abilities, or the Spirit Gate enabling air-benders to return. The overall picture is that Bending is taught not inherited, after the baseline conditions for bending are met.

As the culture tends to silo bending and adhere to specific traditions and prejudices, which include prohibitions on certain kinds of bending as taboo or criminal; and conveyance of knowledge is generally mass-replicated which limit the spread of things like Lava Bending. Across both shows we see many examples of institutionalized schools, teaching, or training all the industrial class model; with rare exceptions of individualized and personalized training, which allow those unique abilities (Toph's blindness leading to her stomp sense and being Beifong's mother teaching her this unique skill; the personalized teaching of blood bending to the brothers; etc).

Considering how fast metal-bending was adopted and spread, it's almost impossible for genetics to be a prerequisite (consider how much trouble it was to collect a handful of air benders around the world; there's no way you have entire cities and police departments and armies operating on metal bending if genetics were the precondition) for Zaofu to exist previously exotic bending has to be teachable (and is as proven by Korra learning it subsequently, the first Metal-Bending Avatar). The speed of the innovation may be considered something like the Flynn Effect regarding ever-increasing IQ in subsequent generations.

That said, the people that make the intuitive leaps seem to need both the disposition for bending at first, and personalized experience to drive innovation. These can be mixed into genetics (like Toph's blindness leads to her sensitivity to metal) but experience seems like the bigger contributor. Taking Bolin specifically, historically benders had been segregated and rarely exposed to other bending types except on the battlefield. However in his era, Bolin is brother to a top class professional firebender, himself a top class professional earth bender, and in constant cooperation or competition with water benders. And that's knowledge built into his body, both in cooperation with his teammates and every time he takes a non-lethal hit during a pro-bending match. Add to that Ghazan breaking the impossibility barrier- proving that it's possible- and his harrowing flight from a flow of lava streaming down his makeshift stairs at him... all of those factors mix to allow Bolin the breakthrough to lava bend.

The Avatar Wiki page on lavabending has as it's first Trivia point:

Following that second link, we find this quote:

So it would appear that lavabending likely does require a firebending and earthbending parent, but this is not explicitly stated. However, since we know that (besides the Avatar) no one can bend more than one element, heritage is the next best explanation for why someone might be able to work firebending into their earthbending.

However evidence thus far has shown that only someone who is primarily an earthbender can perform lavabending (firebenders cannot do it), so it is still the case that someone with earth and fire heritage can still only be either an earthbender or a firebender.

2
Could two benders of different nations have a child could it inherit both abilities?

18
Have people made a correlation with eye color and bending element in Avatar?
2
Did the Fire Nation support child labour?
3
If an avatar goes into the avatar state while being poisoned, do they still die?
15
In the Avatar world, what exactly are they bending?
8
Who is the Earth silhouette in the intro to Avatar: The Last Airbender?
1
Would the order of the Avatar cycle change after Korra started a new cycle?
6
Why was the Fire Nation so indifferent about the Northern Water Tribe after conquering the Earth Kingdom?