This series began with the US being contained by some kind of pulse wall, anyone who attempted to cross it was vaporised. All electricity disappeared inside the wall and society quickly degenerated to anarchy. I had thought the author was Billingham, but apparently not. Anyone know?

As Paulie_D says, John Birmingham has written two novels (so far) in a series which somewhat matches with your description. The first novel, which features an energy wall called "The Wave", which cuts off most of the continental USA from the rest of the world, is "Without Warning". However, all of the events described in that novel occur outside of The Wave.

On the eve of the Iraq War, March 14, 2003, the bulk of the population of the contiguous United States (along with the bulk of the populations of Canada, Mexico, and Cuba) disappears as the result of a large energy field that later come to be known as "The Wave". Without Warning deals with the international consequences of the disappearance of the world's last superpower on the eve of war. 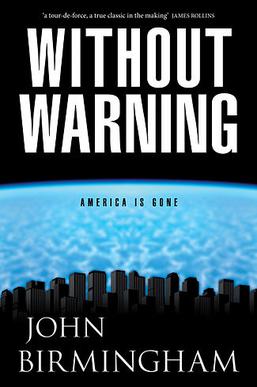 The bulk of the story concerns the remnants of the US government left outside of The Wave (centered on Seattle, Washington state) arguing over who's in charge while simultaneously trying to restart services like water and electricity, and also the country's mostly-still-extant and sizeable military forces, the majority of which were naturally located outside of the area affected by The Wave when it appeared, but which have suddenly lost most of their support structures. Even as what's left of the government is trying to get back on its feet, support the remaining citizens, and reintegrate with the armed forces (while avoiding a military coup), other nations are swooping in to try and grab what they can.

11
Post apocalyptic world, with apocalypse being the singularity
22
Identify a book featuring overpopulated world with limited living space assigned to individuals
4
Title of fantasy trilogy: priestess possessed by spider demon?
2
What US sci-fi TV series has an ill doctor from Desert Storm and a conspiracy?
10
Children's sci-fi series from 70's/80's with a pink blob as a pet
6
Sci-fi book series about two orphan boys who are adopted and trained by two monster hunters
7
Anime Series about a boy with reset-button
5
Story about 2 kids with magic books