Looking for short story about alternate reality inside "the computer", with a cloud city on an icy plain

I am vaguely remembering a short story about from the "cyberpunk" (mid-80s)era about an alternate reality running inside a computer.

In the story, so-called "computerman" (system operators, eh) are sent "in" to check on the alternate reality from time to time. Said reality consists (at least in part) of an somewhat surreal setting of a "cloud city" set above an icy landscape on a girder structure. It is not explained how this comes to be (c.f. the infinite sandy beach with the bunker in Neuromancer). The city can be reached by lift. Somehow I figured this must be an Eiffel-tower riveted truss structure which might fit right into a "Cité Obscures" comic. The city is inhabited by people, but I can't remember where these come from. They are definitely constructs of the system as computermen have special skills or powers that normal inhabitants don't have.

The protagonist's mission is to go after a computerman who hasn't "returned". It transpires that the unreturned has used the special powers of computermen to make himself leader of at least part of Cloud City as he finds local living more to his liking than outside reality. The rogue computerman tries to convince the protagonist to desert and stay, but is unsuccessful: he is shot, and thus ends the protagonist's mission. As the protagonists descends to the icy plain by lift, he reflects on the fact that he doesn't like it all that much out there in prime reality. His final decision is to get back and take over the leadership role so recently vacated by his mark.

Well, I found it by looking through a stack of old books stashed in an unnamed and dank corner of the attic.

It's a story that appears in a french science-fiction anthology edited in 1983: "Univers 1983", where it is marked as "inédit", i.e. unpublished as yet. 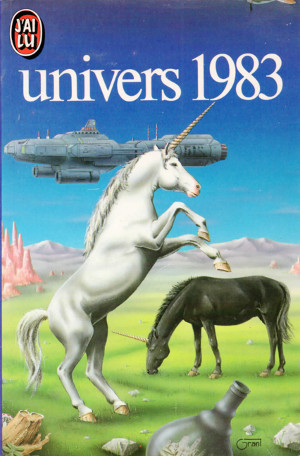 The short story was re-published in 1989 in another anthology, "La Frontière Eclatée" ("The Shattered Frontier").

It is called "La Vallée des Ascenseurs" (literally "The Valley of the Lifts", which doesn't sound promising). The authors are Sylviane Corgiat and Bruno Lecigne. That duo has written a few novels, none of which I have read or heard of. So the story is originally in french. I don't know whether it has ever been translated. I don't think so.

Seeing that "Tron" (the movie) had opened in 1982, the authors may have gotten some inspiration from that.

From the text, here is the handwaving explanation about the alternate reality. There is no direct link to virtual reality or gaming.

The computerman Conrad, now Sir Conrad, has established himself as king of the city of Bass-Einf as he can perform miracles in this reality. Standing in front of his self-portrait in his royal chamber, he reflects on his past:

He contemplated his portrait. He had portrayed himself as a teenager with short hair, with lines accentuating the angles of his face. He had conceived this painting by trying to remember an old photo ID formerly taken for the Wotan project file. His candidacy had been favorably received. He had become a computer man.

Wotan was a gigantic computer gathering all of the world's data banks. It was later discovered that Wotan could give access to other strata of reality, which was globally called the computosphere because of its property to absorb or swallow computer programs. The computer-men, who lived in symbiosis with Wotan, had the possibility of projecting themselves into the computosphere. It was unclear to what extent these other universes pre-existed Wotan; or otherwise to what extent the simulated programs in the computer had shaped the profile of these worlds. Some computermen had undertaken the exploration of the deepest and most stable strata. Many had never returned ... just could not have come back, because of what they had discovered. This was the case of Conrad, Sir Conrad.

Sometimes, in a paradoxical reversal, he had the impression that he never really had had an earthly life; a kind of expired childhood, now being erased, in which the adult was unable to recognize himself. Even if Bass-Einf was only a computed reflection, a simulation of the universe, the real Conrad was the one who lived in this country, painted, breathed the icy air, had enjoyed Silvanie's arms. Sometimes, however, he was conscious of living as if out-of-place, of being a usurper and of occupying the palace of someone else, so that one day someone would demand that he give back what did not belong to him. He was unable to decide between these two contradictory feelings.

Under Silvanie's dumbfounded eye, he emptied a tube of black onto the canvas and carefully spread the thick paint over the whole surface of the portrait.

The story ends with Alexander the hitman killing Conrad by throwing him overboard one of the lifts going down from Bass-Einf:

"Farewell, Conrad," he said. He hurled him overboard. He did not hear the sound of the body being crushed, miles down.

It did not matter. Farewell, Conrad he thought with sadness. If it cheers you up, know that I will not go back.

He had made his decision, for good. Bass-Einf was now lacking a Worker of Miracles. Tomorrow morning, Alexander would take a lift, again. To the city of Bass-Einf.

In his mind he formed the image of a pack of cigarettes, which rolled over the worn floor of the platform. He took the first puffs, listening to the irregular creaking of the giant mechanisms.