I read this story around 40 years ago in the late 70s, though I think the anthology it was in was already at least 10 years old at the time. The story (in my memory) seems much more like a golden-age story than something that would have been written more contemporaneously.

The story is set on a planetoid or asteroid with a mining base (I recall the population being overwhelmingly, if not entirely, male) that is attacked and taken over by a hostile force. (They may not have been precisely pirates, but a hostile military force attacking a civilian base is pretty close to that.) The miners are herded into a pit (the mine?) with the pirates placing ray gun emplacements around it to keep them under threat. I do not recall what the pirates were after; it may be that the miners were only hostages.

It turns out the ore in the pit can reflect the rays from the pirates' guns, so after some surreptitious preparation the miners attack the pirates, reflecting their own guns back at them.

In my recollection, the miners were described as "dancing" as they dodged and reflected the rays.

(In retrospect, those were some pretty stupid pirates.)

This is probably "Bullard Reflects" by Malcolm Jameson.

In this story they aren't miners though, but spacemen who play a sport called "Dazzle Dart" which involves reflecting light beams. They are captured by bad guys who dump them on an asteroid to hunt them down for fun.

However, the asteroid has a reflective ore (from a meteor, I think) on it, and the spacemen fashion mirrors and use their mad Dazzle Dart skillz to reflect the bad guys' beams back at them.

The final battle has them trapped in a crater/pit as you remembered.

You can read the original Astounding publication here. 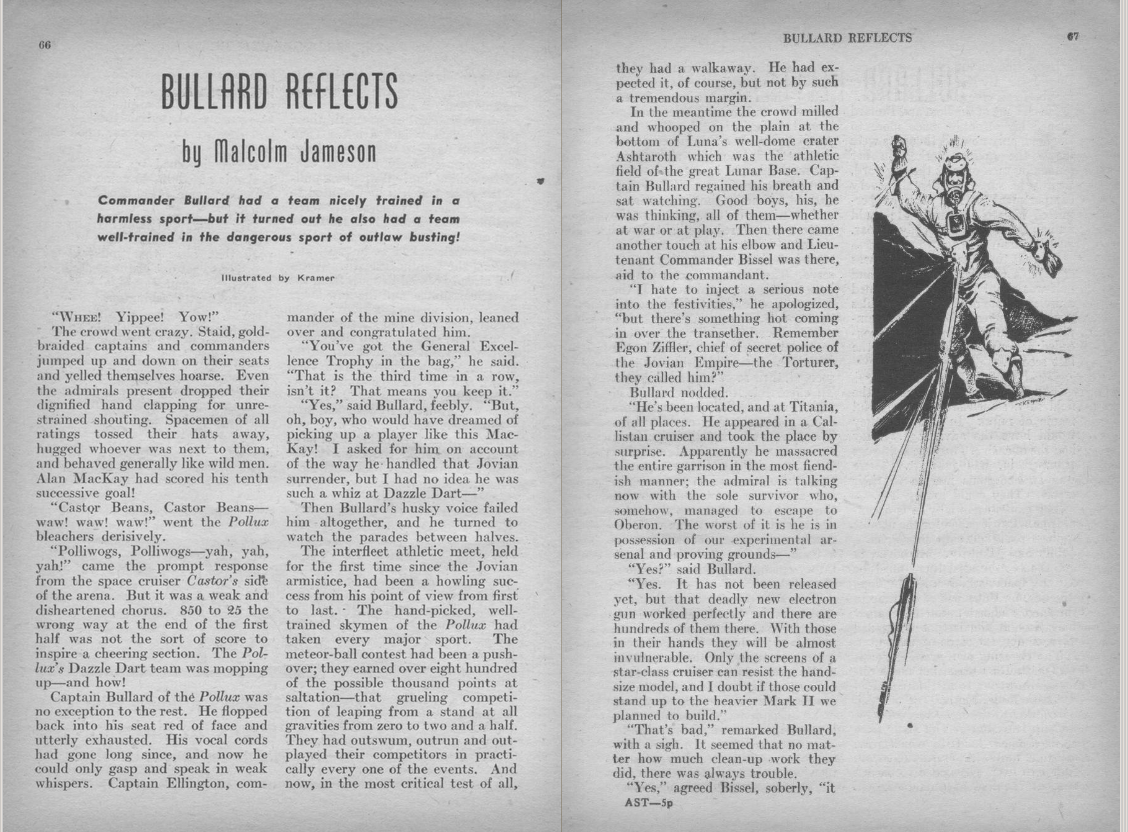 The story is in the classic anthology A Treasury of Great Science Fiction which was a mainstay of the Science Fiction Book Club in the 70s. I wouldn't be surprised if that's where you read it.

10
Short story where humans (miners?) conflict with collectivist leaderless aliens who cause earthquakes
0
Story where refugees get attacked by space pirates?
9
Short story where a man escapes a prison cell by creative use of vomit
9
SF short story where animals are genetically engineered to have hands and hunt hunters with guns
9
Short Story where school kid (and their family) turn out to be alien(s)