Movie about two sisters, the bigger one being evil with magic

I saw a movie on television (so it could be a TV series) when I was little in the 2000s and I don't remember a lot. It was set in the time where they wore like ballroom dresses.

I remember there were two sisters; the big one was evil with magic I think. There was a character with a zipper in his head too.

I remember one scene when the little sister is running through a labyrinth, and another scene when they were in winter time and I saw this zip head character. I remember when I saw at the end it said to be continued.

This may be Tin Man(2007), a miniseries on the Sci Fi channel. Alan Cumming's character "Glitch" had a zipper on top of his head because his brain had been removed. I don't remember whether Azkadellia (the evil witch ruler of Oz) and Dorothy (played by Zooey Deschanel) were sisters. Here's a picture of Glitch with the zipper visible. 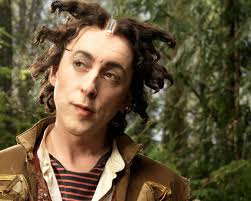 DG (Zooey Deschanel) is a small-town waitress who feels that she does not fit into her Kansas farm life and has visions of a lavender-eyed woman (Anna Galvin) warning her that a storm is coming. DG's visions are realized when the sorceress Azkadellia (Kathleen Robertson), tyrannical ruler of the O.Z. (Outer Zone), sends her Longcoat soldiers through a "travel storm" to kill DG. She escapes through the storm into the O.Z. and befriends several of its inhabitants: Glitch (Alan Cumming), who had half of his brain removed by Azkadellia; Wyatt Cain (Neal McDonough), a former "Tin Man" law enforcer who was locked in an iron suit for years as punishment for opposing Azkadellia; and Raw (Raoul Trujillo), a "viewer" whose people have been enslaved by Azkadellia.

DG receives a magical symbol on her palm and learns that her Kansan parents are androids and that her real mother is the lavender-eyed woman of her visions. Visiting the Mystic Man (Richard Dreyfuss) in Central City and continuing on to the Northern Island, the group learns that Glitch was once the advisor to the Queen of the O.Z. and that DG and Azkadellia are actually sisters and the daughters of the Queen. DG remembers that Azkadellia killed her using dark magic when they were children, but their mother revived DG by light magic and gave her secret instructions on how to find the Emerald of the Eclipse, which Azkadellia now seeks. Azkadellia confronts the group with her Longcoats and mobats, capturing DG and Raw. Cain fights the Longcoat captain Zero (Callum Keith Rennie) and learns that his wife and son, whom he thought Zero had killed, are still alive. Zero shoots Cain, sending him falling into a lake of ice.

8
Two sisters run into the woods. Eldest sister is captured by a witch and turned into a witch

8
Title of a fantasy movie with girl in red armour
6
80's barbarian movie with female lead, evil scientist, pool of acid
59
Movie about a boy, two men, a robot and a war
7
Vampire book series about twin sister high schoolers with one being a vampire
8
Two sisters run into the woods. Eldest sister is captured by a witch and turned into a witch
2
Old movie on a spaceship with an evil scientist with robots
6
Two(?)-book series about dragons, two sisters, a wizard, and time travel