Is Cobb always wearing his wedding ring when he's in a dream?

Every dream-maker in the movie, Inception, uses a totem to tell if they are in a dream or the real world. The totem is a small object they carry with them and is supposed to have certain properties (Cobb's top always spins, Arthur's loaded die always lands on right number, etc...) that makes it easy to know. Nobody else is supposed to touch another person's totem.

A fan theory is that Cobb's real totem is his wedding ring and not the spinning top since the wedding ring appears in dream scenes, but not real world scenes.

I want to test that fan theory.

In answer to your specific questions:

In conclusion, given that he's seen wearing his ring in both reality and dreams, it would seem to be useless as a totem. That being said, the concept of even needing a totem (to determine reality) appears to have been something that came after Cobb and Mal got stuck in Limbo.

Based on Cobb's speech to Ariadne, it looks like Cobb and Mal were among the first people who'd ever spent long enough in a dream-within-a-dream to actually need a totem, and even only then after the dangers of confusing reality with dreams became frighteningly apparent.

COBB: We were on a job. Exploring dreams within dreams. But we didn’t understand how your mind can turn hours into years. How you can get trapped. Trapped so deep that when you wash up on the shore of your subconscious… 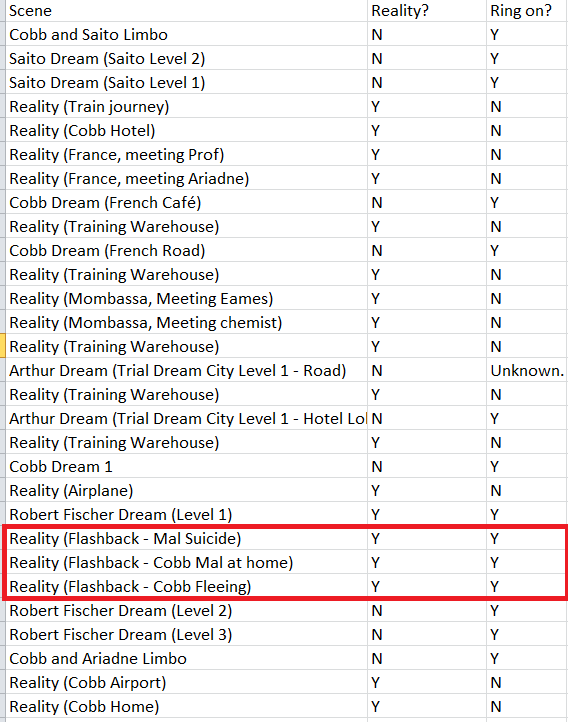 Not the answer you're looking for? Browse other questions tagged inception fan-theory or ask your own question.

9
What was Cobb's totem before the spinning top?

27
In “Inception”, why didn't Cobb take his kids with him when he had to flee the country?
7
If Cobb's spinning top totem stops spinning, does this mean he is in the real world?
3
In “Inception”, why didn't Cobb have Miles (Michael Caine) fly his kids to France?
12
Why did Cobb ask Ariadne for the secret passage in the third-level dream?
7
Why was Cobb so afraid to go into limbo, if he had already gone there and knows that he can use his totem to get out?
8
In Inception, how does the machine determine who are the Dreamer and Subject?