Which book or source has mentioned Ginny Weasley's name as “Ginevra Weasley”?

I have encountered "Ginevra Weasley" a number of times in jokes and I recently saw the full name of Ginny on Wikipedia:

Wikipedia doesn't have a citation for this name. Is this correct name? If yes, what's the source? 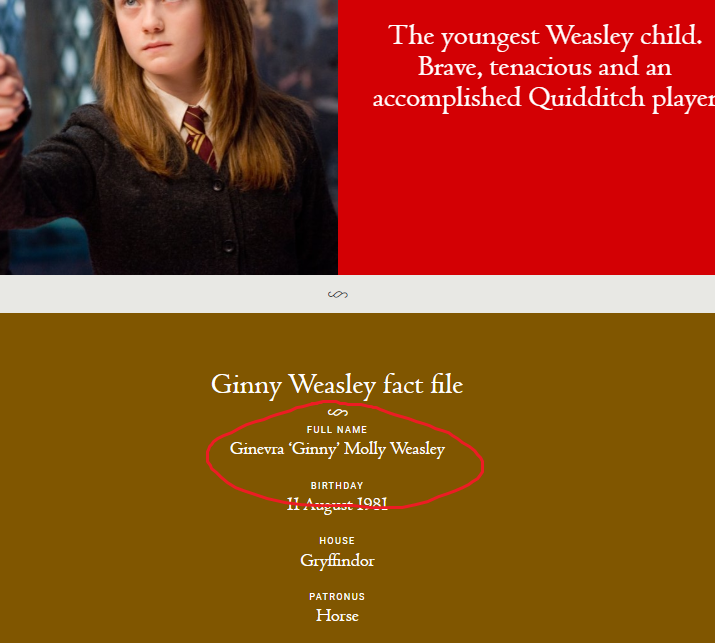 ‘Yes, my tiara sets off the whole thing nicely,’ said Auntie Muriel in a rather carrying whisper. ‘But I must say, Ginevra’s dress is far too low-cut.’
Ginny glanced round, grinning, winked at Harry, then quickly faced the front again. Harry’s mind wandered a long way from the marquee, back to afternoons spent alone with Ginny in lonely parts of the school grounds. They seemed so long ago; they had always seemed too good to be true, as though he had been stealing shining hours from a normal person’s life, a person without a lightning-shaped scar on his forehead …

Her full first name was originally confirmed in May, 2004 on JKR's old flash-based website;

Arthur Weasley was one of three brothers. Ginny (full name Ginevra, not Virginia), is the first girl to be born into the Weasley clan for several generations.

And her middle name was confirmed (by JKR) in March, 2004

kylie: Thanks for writing such wonderful books, Ms Rowling :). Just one question: What are Ron, Hermione and Ginny's middle names? Thank you :)

In the very last book, Ginny is called Ginevra for the only time in the series, by her Auntie Muriel. Her real first name isn't mentioned at all throughout the rest of the Harry Potter books.

32
Why was Harry casting shield charms against Voldemort in the Battle of Hogwarts?
73
Why didn't Molly Weasley remember the platform number?
38
How was Molly Weasley powerful enough to Kill Bellatrix Lestrange?
68
Is this a laptop in the Weasley's house?
14
Who is included on the Weasley's clock?
4
Why was Molly still wearing her cloak?
10
Which Death Eaters were named after J.K. Rowling's Friends?
19
When did J.K. Rowling decide to make Harry and Ginny a couple?