Does anyone know the name of this short story for children which I read in the 70s / early 80s?

It is set in a seaside arcade where an old lady, who minds it, has fallen asleep and a spider is making a web on her. The whole place looks a bit rubbish. These two boys go in and find a game that looks kind of clean, and weird enough that they have a go on it.

The story has a name that is also the name of the game... It's something the somethings... I can't remember it. The boys themselves say "whoseing the whatsits?" when they read its name.

As they play, the graphics get more and more realistic until an angry alien climbs out of his now punctured enemy ship complaining at them, something is triggered and the entire arcade parlour gets destroyed and the kids barely make it out.

At the end the boys realise the game is some kind of test to make people around the galaxy participate unknowingly in some space battle.

"Vurfing the Gwrx", a short story by Michael Scott Rohan; published in the 1982 Puffin Books anthology Peter Davison's Book of Alien Monsters, purportedly edited by actor Peter Davison (the fifth Doctor), but actually ghost-edited by Richard Evans according to the Encyclopedia of Science Fiction. 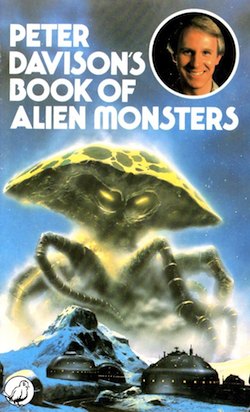 Vurfing the Gwrx: It looked like an ordinary space invaders machine — but it was anything but a game...

An excerpt from the story, thanks to The Space Museum:

It had a name at last. Between the screen and the top of the case large odd-looking letters in dark winegum purple spelt out: VURFING THE GWRX
Brian giggled. "Whosing the What? How'd you say that, goo-erks or what?"
"Oh, go ask a Dalek -"

Not the answer you're looking for? Browse other questions tagged story-identification short-stories aliens video-games or ask your own question.

29
What vintage movie had this blue floating holographic head talking to some kind of military installation?
7
Kids story, probably late 80's/early 90's: boy plays arcade game that is actually a test by aliens