Fantasy series with a warrior elf who had magic tattoos [duplicate]

Ask Question
Asked 1 year, 8 months ago
Active 1 year, 2 months ago
Viewed 234 times
7
This question already has an answer here:
Book/series with winged elven hybrids and a group bringing a child to the north to defeat a great evil (1 answer)
Closed 2 years ago.

I remember reading a series of fantasy novels around early 2000. I think the name was the Cartographers Map, the other title was Hunters Moon (Something Moon?) but I've searched of these titles and not found any suitable results.

I remember there was a warrior elf with magic tattoos that glowed blue. I also remember the main villain was an ice queen from the north lands named Chytrine(?).

This is the DragonCrown War Cycle series of books.

The DragonCrown War Cycle is a four book fantasy series consisting of a prequel, The Dark Glory War, and three main volumes, Fortress Draconis, When Dragons Rage, and The Grand Crusade. The books were written by Michael A. Stackpole and published by Bantam Spectra, a subsidiary of Randomhouse inc. over the course of 4 years from 2000-2003. The books follow a group of heroes as they struggle to bring to fruition the Norrington Prophecy, so that they can defeat the evil Queen of the north, Chytrine, and save the southern kingdoms from destruction. 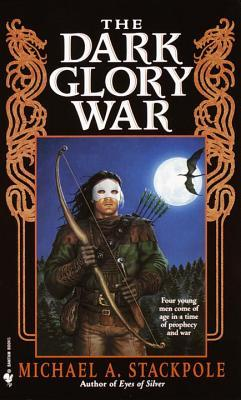 5
Fantasy TV series set on a pacific island?
8
Fantasy with attempts of explanation/rationalization of magic, werecreatures
10
Fantasy book series (perhaps trilogy) with elite soldiers flying on birds
7
Epic Fantasy Novel with Runes
13
90s (or earlier) cross-world fantasy book with a circular river and character-class tattoos
20
Fantasy novel/series with young man who discovers he can use magic that is outlawed
26
Old story about a man with tattoos that told stories