Could you help me identify a DC comic I read in the early 1980's? I only read a few pages then but as far as I can remember this happen.

A hero similar to Superman but in a red suit, and another guy that clearly was not Superman but was wearing Superman's suit, faced a huge demonic creature that seemed to be made of fire. The other guy apparently wanted to sacrifice himself to it even though he knew he would not survive it, the hero did not think it was a good idea. Against the heroes wishes the other guy flew straight into the demons mouth, and immediately got devoured in an explosion of energy, leaving only Superman's empty suit falling to the ground. The hero picked up the suit and flied away.

That is all I can remember, but I have wondered ever since I read it what actually was going on in that story.

The key parts that i can remember are.

The comic - It was a Swedish translation of an american superhero comic.The parts i remember were on two pages from somewhere inside. Page 1 was the heroes talking, and the man flying toward the demon. Page 2 was him getting eaten, the suit falling and the hero picking it up and flying away.

The time period - Definitely before the Crisis of Infinite Earths. Probably the 70s

The setting - Some undefined location. There were very little background details, mostly just the flames of the demon. They did not appear to be on Earth, or atleast any common part of it.

The hero - Supermanlike in appearance but rather powerless. He clearly could not stop the other guy from flying straight into the demons jaws even though he tried to talk him out of it. He was wearing a red suit that might have been similar to the one of Sunboy or Mon-El from the League of Superheroes wears. His face was visible and I thought it looked similar to Supermans, but I could be wrong on that. My initial guess as a kid was Captain Marvel, but that does not explain the Superman suit or fit any story i know.

The other guy - He was acting apologetic and seemed to think he had an obligation to be killed by the demon. He wore Supermans suit and could fly. When he reached the demon he exploded in a cloud of energy between the demons jaws, but the demon did not appear to be hurt by it. The Hero did not seemed to be very shocked by this, but rather thought that it was tragic.

The demon - It was huge and made of fire. You could mainly see its head. It appeared slightly dragonlike. I thought it looked a little like this guy Azgore, from Justice league 145, even though the rest of the story does not match. 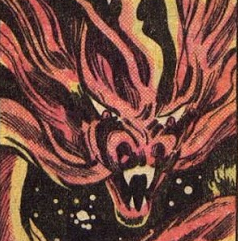 Today while looking for the answer to another question I stumbled on the answer to my own. In the fourth issue of a quite obscure mini-series called "Superman presents The Phantom zone", the demonic devouring happened. Apparently I had remembered most of the details correctly, but I did get some of them wrong. 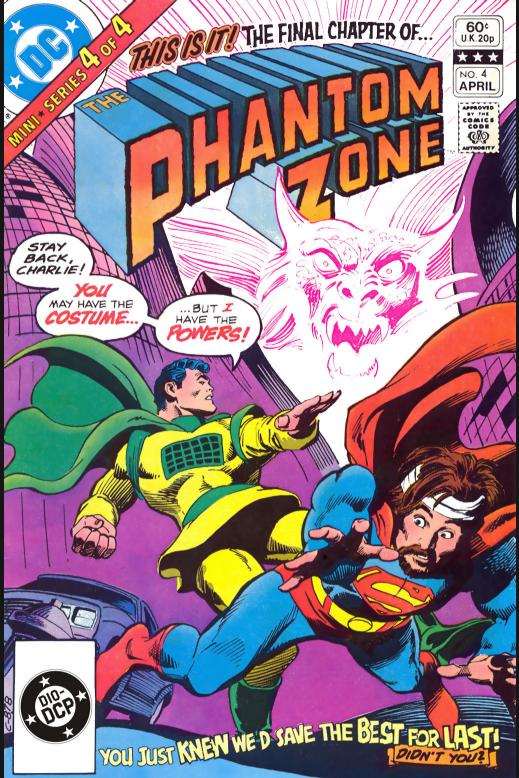 In this story the Phantom Zone criminals had found a way to escape the zone while simultaneously trapping Superman and a depowered kryptonian called Charlie in there instead. Superman and Charlie tried to get out by crossing into a neighboring dimension populated by an near omnipotent demon called Aethyr. They got discovered almost immediately and tormented by Aethyr by having their bodies and the environment messed around with, leading to this. 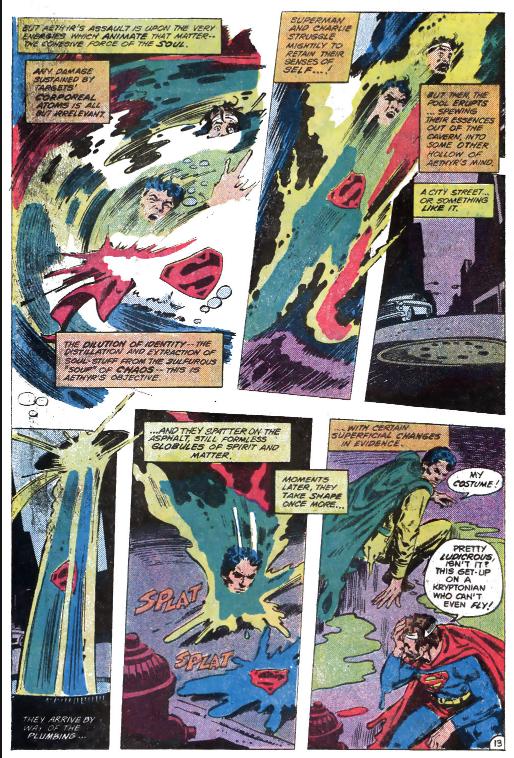 This was the first page i remembered, apparently i remembered Superman's costume wrong since i thought it was red instead of yellow but the rest matches up.

On the next page Aethyr decides it is time to go in for the kill. Superman wanted to fight him alone, but Charlie came to the conclusion that he must sacrifice himself, since Superman was better equipped to fight the demon but could not do it since he might be distracted by worrying about Charlie. 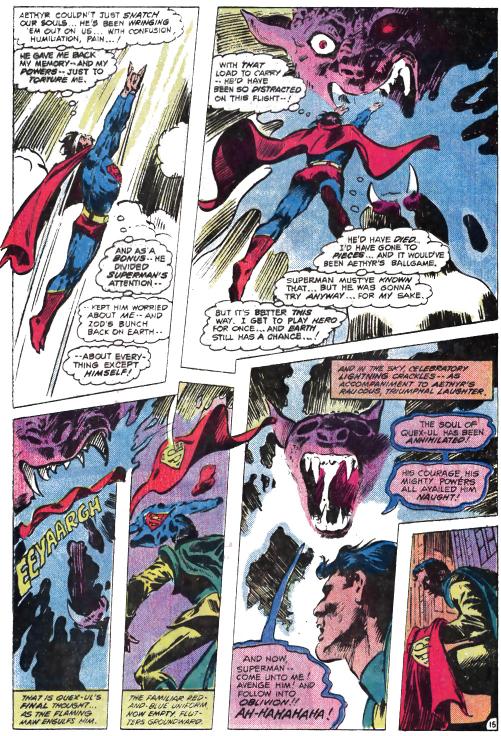 Those pages were all i had at that time, still it was pretty heavy stuff for a 10 year old.

22
How have Superman comics dealt with the Man of Steel, Woman of Kleenex problem?
10
Which came first, the "S" or the Superman?
13
How does Superman get indestructible costume everytime after he loses existing one?
6
In what comic do several people each get different individual Superman powers?
3
Identifying a Superman Elseworlds comic where the Kyptonians take over Earth
10
Why did dirt on Superman's coffin start to float?
10
90s/early 2000s animated Superman TV show episode in which Superman goes rogue under the influence of a sea star-like creature
22
1970s team-up comic in which Superman nonchalantly kills a sentient brain?
10
Superman comic story where he wears a different costume and has an actor pretend to be him
4
Which comic issue does Superman fight someone powered by prayer?