This has bothered me ever since I noticed it; the viewscreen in The Next Generation shows perceivable depth even when viewed from an angle when, I would imagine, such an angle should start to warp the image (like with TVs in real life). 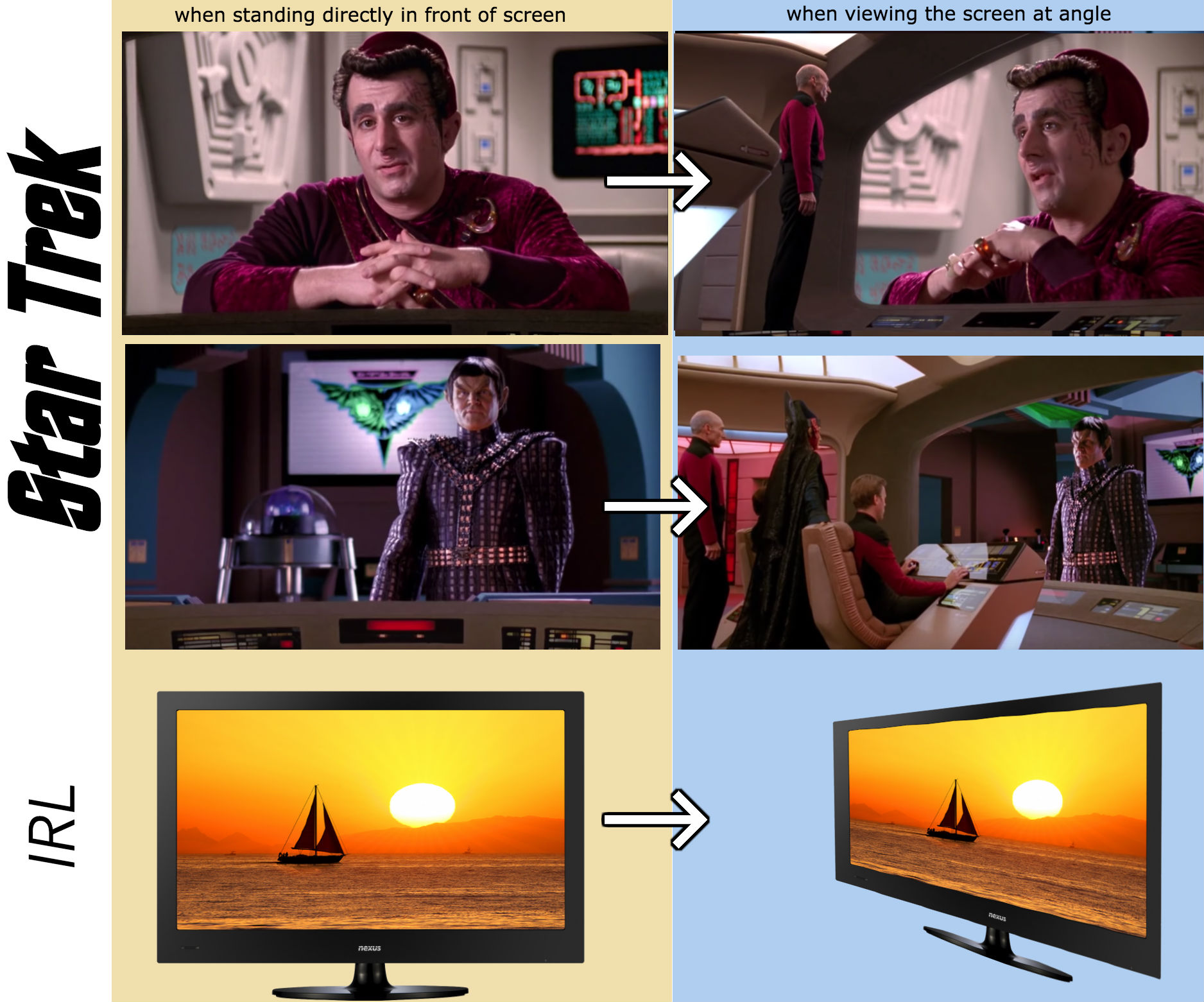 In the video, he implies that this was all intentional; that the viewscreens were meant to showcase some fancy, futuristic 3D/depth-capable screen technology.

There's no on-screen canon explanation given.

However, the Star Trek: The Next Generation - Technical Manual states

In the Star Trek: Voyager episode “Year of Hell,” there is a scene where the viewscreen is offline due to heavy damage to the ship.

What's interesting in this is that it is not simply black, like a monitor nowadays when offline, but it has a structure that looks exactly like the wall of Voyager's holodeck. 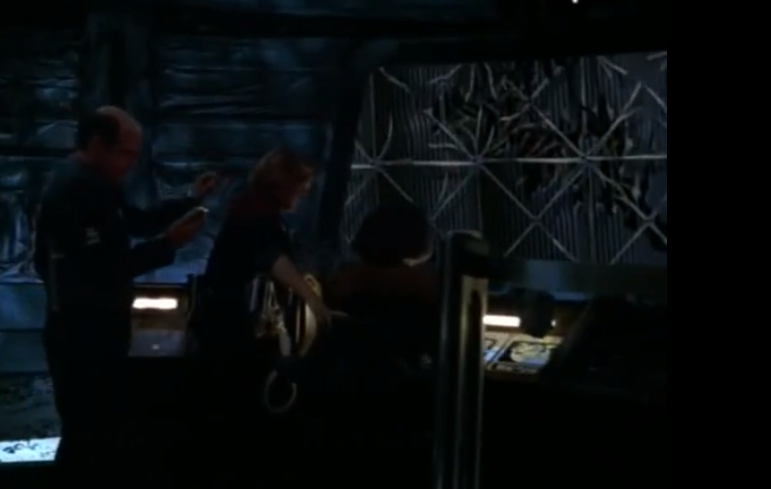 So I guess it achieves the fancy 3D effect by using similar technology to the holodecks. (An other answer has also conjectured the similarity to holodecks, but I don't have enough rep yet to comment on that answer.)

Great theory, but I suggest another reason they depicted the viewscreens as they did: A 2D image of someone looking straight into the camera appears to be looking straight at the viewer regardless of the viewing angle, and this is unnerving. It's the effect of a portrait that seems to stare at you no matter where you are in the room. This may be why portrait artists often pose the subject looking to the side. It's less creepy. A realistic 2D video conversation might have looked like this, which might even make an audience laugh. 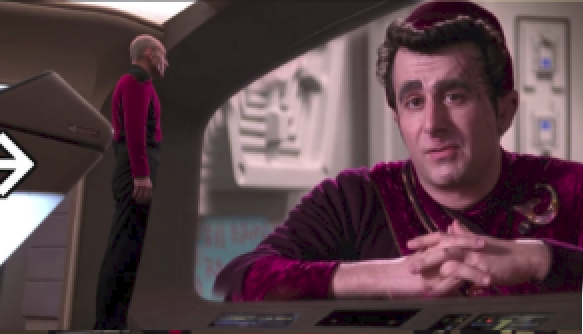 Current viewing panels are "flat" because each pixel is essentially an omnidirectional lighting element. If you could make each pixel emit light in only one direction (like a laser vs. an LED), then you would only be able to see the screen from one angle. If you can further combine that with being able to emit multiple different pixels at the same physical location, but with different "output angles", then you can make a display that appears "3D".

The basics for this sort of thing have actually been around for some time, using a technique called lenticular printing. More recently, there has been work into making interactive displays using the same principles. Presumably, Star Trek is just using an advanced version of something that works on the same idea.

A second interesting observation is that the viewscreen potentially presents a 180 degree FOV's worth of information. Even though this is not visible to someone looking right at the screen from a distance, if you put your cheek right up against the "glass" of the screen you can seemingly see the very corners of the other side's bridge.

Below: The blue door, and the control panel with two levers is only visible from the viewer's POV, not the captain's.

I think it is obvious from that that at the bare minimum, there is a camera(s) on the other end which has a full hemisphere of viewfield, possibly a full sphere.

The easiest way of inmplementing the screen, then, is to build a bowl-shaped alcove or recess into the wall of the bridge, and have the (curved) screen lie along this surface. That could also produce the illusion of the screen "always facing you", using an old low-tech trick:

Given ST's tech level, I would expect there to be an array of scanners and sensors all around the bridge, able to provide a view from any angle at will, and even compose a 3D representation of the scene.

On the receiving end, you could use the same technology as in holodecks to reconstruct the scene in a very lifelike matter.

One thing that always concerned me is the security implications of showing foreign military personnel an image of your starship's bridge. Especially with ST's tech, it shouldn't be hard to edit the video stream online and insert a generic bridge background scene behind the captain. Perhaps this is already happening in the usual case: You could imagine that the comms equipment defaults to transmitting the image of the speaker, and the receiving equipment automatically fills in the missing background with a standard scene.

As far as I can remember, they never gave any kind of explanation in-universe for how the viewscreens work.

There is no in-universe explanation for all of the viewscreen's tricks.

In "The Defector" (TNG 3x10), the viewscreen emphasizes a dramatic moment by zooming in on the face of Romulan Commander Tomalak. 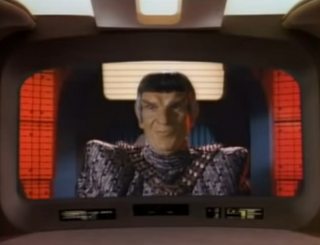 "First, Captain, you will return the traitor Jarok, then you will surrender as prisoners of war." 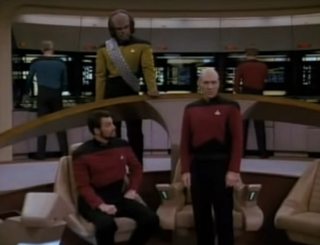 "Do you seriously expect me to accept those terms?" 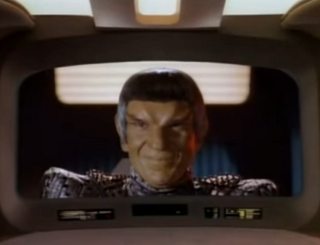 "No, Captain Picard, I expect you won't. You have thirty seconds to decide."

The exchange starts at 0:10 in this video:

A pretty simple speculative in-universe explanation is that it uses roughly the same technology as the holodeck. It's already a technology that exists on the Enterprise, and the viewscreen wouldn't have to really be as complicated since nobody has to interact with it physically.

I'm not aware of any explanation that's been given in-universe, though.

We already have this technology. Since 1901.

With lenticular lenses, the angle of the viewer determines what image is seen. So far, we're exploiting it within limited range, to feed left eye something different than right eye, eg. in Nintendo 3DS. One of the reasons we don't do it to the extent shown in Star Trek is that it's very cumbersome to get enough images taken at all angles in order to feed such screen. Fo me more puzzling is where are the cameras all around the bridge : )

Not the answer you're looking for? Browse other questions tagged star-trek star-trek-tng technology or ask your own question.

19
How did Star Trek characters detect being unconsciously tricked into a simulated Holodeck reality?
21
How Many Quasi-Gods Show up In Star Trek?
20
What are the chase lights under Star Trek viewscreens for?
31
When/How would Star Trek captains update their log?
7
How many Star Trek species possess 'mega-strength'?
34
In Star Trek, how fast is warp 9.99?
6
Did any Nanites ever show up in any Star Trek stories after Evolution?
12
How are residences assigned in Star Trek?
4
What other Star Trek series did the main TNG cast show up in?
12
Which Star Trek: TNG episodes show the Transporter controls in use?