Movie about "flying spheres with saws" which killed people?

My memory is vague but more than 20 years ago there was a horror movie in tv where there were "flying spheres with saws" which killed people by cutting them, and IIRC there was a kid/teen with a gun who shoot at these. Never could find it in my searchs. Any idea which movie could be?

This is almost certainly one of the Phantasm movies. The thing you describe is called a Sentinel. The sentinels are usually silver spheres that fly through the air, approach the head of a person, then two prongs come out to stick into the front of the forehead. Then the drill comes out and drills through the front of the forehead, actively pumping out blood as it works.

Here is a sentinel in flight with the two prongs out to stick into a forehead:

I think in Phantasm 2 we see the villain ( The Tall Man) has a Golden sentinel with saws that come out, but generally it’s the prongs, drill, and pump. If you remember a saw, it probably looked like this: 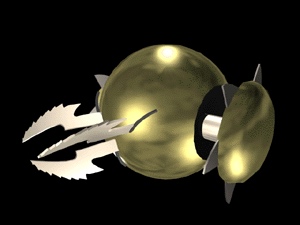 As an aside, the first Phantasm (which you may be describing, although Phantasm 3 also has a kid that shoots them) was recently remastered by JJ Abrams (who turns out to be a huge fan of the series and created the character Phasma in the new Star Wars movies as an homage) and is about to be in select theatres around the country as the director Don Coscarelli uses it to raise awareness of his autobiography. If you want to see a remastered version of the original in the theatre, this is your chance.

All images acquired from http://the-singularity.wikia.com/wiki/Sentinel_Sphere

2
What is the early 80's sci-fi/horror movie with floating glowing balls, but is NOT Strange Invaders?

9
Movie Identification: 1980/1990's sci-fi with people on a spaceship getting killed in cryosleep/Virtual reality
12
Movie Identification: 1980/1990's movie with flying creatures and a beautiful actress
4
What kids film had two flying spheres, one red, one yellow?
15
Movie where lightning brings people back to life as "blue people"
4
Film with an invisible body hopping spirit which is let loose from watching an old movie tape
5
Discovery Channel movie about a rover entering an organic spaceship, activating a green light that causes black spheres to appear on Earth
6
Horror movie about a robot kid with claws for hands
12
2000s movie where mysterious black alien spheres surround the Earth
15
Looking for a horror movie about a serial killer with an African mask
15
Anime style movie about mutated people that gain murderous abilities such as projectile-shooting limbs and limbs with blades on the ends