Book like Time Safari with invisible and sentient dinosaurs

I'm looking for a book I've read couple years ago. The plot was similar to "A Sound of Thunder" and Time Safari.

In rough sketches the plot is as follows:

A group of rich people embark on safari trip via time machine. Among them there is one hunter guy and a certain woman. Can't remember the details about her, only that at first they don't like each other and it's them at the end in that restaurant on a date.

They do safari stuff, which is starting to getting out of hand. Maybe in the middle of the story author somehow hints that dinosaurs may be invisible. In the climax there is a large fight between the humans and dinosaurs. Probably lesser creatures are influenced by those invisible ones. Humans somehow win, though one might be dead, and return to their times.

Sometime later, said hunter guy meets that woman in the restaurant. They're having a date. I think it was she, who gave him a gun. It might have been a revolver, maybe with special bullets. Then more than one dinosaur, I think, makes itself visible and attacks the couple. They fight back. I don't remember what was next.

Those dinosaurs were sentient enough to be looking for members of the original group and to have some sort of control over lesser dinosaurs.

I finally tracked it down. The book I was after is by Miroslav Zamboch and titled Predators (Predátoři); it was published in 2007. Summary from the link and translated courtesy of my browser so there may be mistakes.

People have long ruled their planet and want more, to control the universe - and time. The opportunity to look back in the past is so appealing - to see the world about a hundred million years ago. World of native continents, a world of the greatest predators that ever lived on Earth. Travelers do not know, however, that they are going somewhere where they do not belong. In space and time, where they encounter something they can not even handle their most modern weapons. Where there is something that can kill us all.

I recognize the cover. 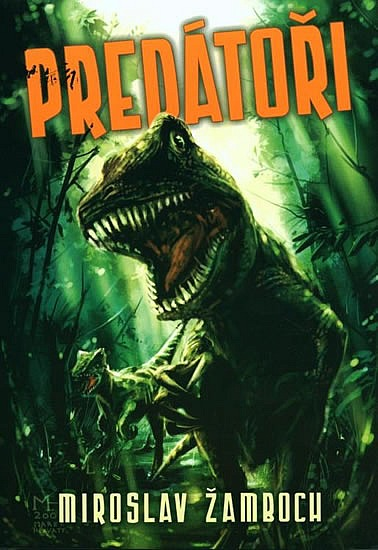 I am not convinced it is the answer, but The Dinosaur Four by Geoff Jones ticks off some of the boxes. It involves people transported back to dinosaur times, and the experiment which transfers them back is associated with invisibility. That said, I haven't found any mention of the dinosaurs themselves being invisible, although a diagram by the author explaining the end does indicate that a T-Rex comes back with them. Another point against it, it doesn't sound like the dinosaurs are sentient. 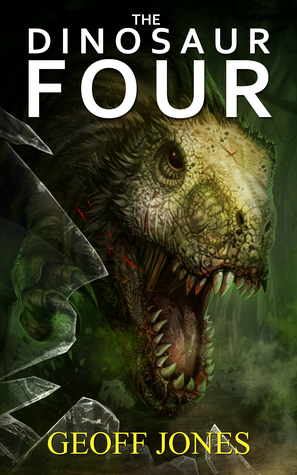 They came for the coffee and wound up in the Cretaceous.

A ticking sound fills the air as Tim MacGregor enters The Daily Edition Café, hoping to meet his new girlfriend for coffee. Moments later, a chunk of building is transported 67 million years back in time, along with everyone inside.

Ten unlikely companions find themselves in a world of dinosaurs and prehistoric reptiles. Several survivors compete for leadership as they search for a way home, and one member of the group plots to keep them all trapped in the past...

Not the answer you're looking for? Browse other questions tagged story-identification books time-travel dinosaurs or ask your own question.

7
Title of a sci-fi book with time-travel and sentient dinosaurs
83
Movie with magical book showing events of any day in history, except missing days of the Gregorian calendar change
14
Book about a time-traveling dinosaur hunter
3
The name of the comic book about the Hulk and the dinosaurs
6
Pre-80s book about a man and a woman forced to fight golden "superior" aliens
4
Anime with a ship in a sky and people with abilities/powers fighting
7
TV educational short film with kids trying to find a paleontologist via his messages. Turns out he's a dinosaur