Movie (pre-1998) - Alien like creatures on an abandoned airport [duplicate]

I saw this movie when I was a very young kid with my grandpa circa 1995-1997. I don't remember when the movie was actually produced, but I have a feeling it wasn't a very old movie, like pre 1990s, or an 80s, 70s movie. It should have been made around 1990-1996. I remember the graphics of the aliens were good at the time (although if I saw them now they would probably look cartoon-ish). My guess is it a b-movie horror flick (most likely with bad ratings).

It was an adult movie (but he didn't care). It was certainly very frightening to me at the time and there was a lot of blood and even aliens eating people (I don't remember many more details though). I was glued to the screen. I remember there were rounded-shape aliens, or strange looking red demon like creatures that appeared not to just haunt but actually attack a group of people that were stranded in an abandoned airport. It's not much of a thriller movie, but horror & science fiction I believe, with a touch of mystery before the aliens made their full on appearance and were trying to eat everyone. By the way it was an American movie, everyone was speaking English.

I can't remember how this group of people got themselves there, their airplane crashed (but how would they survive then?) or something else happened. But I do remember it was an abandoned airport for sure. They found themselves stranded there and there was NOBODY there. They tried to call for help but all communications were down (not 100% sure on this). It was a wide open desert-like field (looked like Arizona or Colorado). I don't remember any of the actors either, but a white male protagonist on the role and a white female as well as a few other people in the group of various colors etc. It had a mystery feel on the first half of the movie and the other half was horror. I don't remember what happens in the end either. I do sort of remember they reach the conclusion that the aliens ate everyone there though.

I remember that those were in fact aliens and not demons. The movie was clinging on Sci-Fi not paranormal (that's why I don't think they were demons). Pretty sure on the alien part.

I have a clue as to how the group found themselves there. I believe it is correct. Their airplane needed emergency refueling, so by radar the pilot found a nearby airport (but I don't believe he communicated with someone). So they decided to make an emergency landing and upon arrival they could not find ANYONE there. So they were looking around, the passengers were curious. All in all the group of people couldn't have been more than 20. I remember the airplane that got them there was quite big but that doesn't justify the fact that the people were few in numbers.

Feels like The Langoliers from a Stephen King Book

On a red eye flight to Boston from LA 10 people wake up to a shock. All the passengers and crew have vanished. When they try to contact the ground they make no connections. They land the plane only to discover that things haven't changed. But its like the world is dead. No one is there, the air is still, sound doesn't echo, the food is tasteless. And a distant sound is heard coming closer. A race of monstrous beings bent on their destruction is heading for them, eating everything in sight. 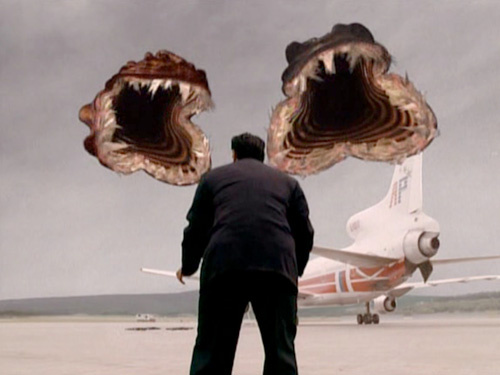 13
What story had the world being eaten every night by toothy orbs?

10
What is this old movie that featured round, flat creatures that killed by touch?
15
Old movie with abandoned spaceship and skull in helmet
5
Film where aliens looking like humans are waiting in an airport closed due to snowstorm
9
Scifi movie where an alien has a baby on a bus
6
Movie with spider aliens?
8
Movie: astronauts visit a Mars-like planet with aliens passing as humans, alien embarks the ship, which destructs before landing on Earth
3
Horror movie where an abandoned monastery/asylum conducted experiments on people with fly toxin
6
'80s movie with a humanoid alien in a glass casket
4
80s-90s movie about teenage alien boys landing on earth