Looking for a novel series I read in the 1980s about 4 soldiers (the leader was a US Marine Force Recon member). There was also a Navy Officer, Green Beret soldier and Air Force fighter pilot.

They were some sort of special team put together by the last president before the war... and now travel around trying to restore order to the US after a war (Nuclear War I think).

Taking place in the early 1990s, this first novel sets the stage for the ensuing volumes. The Guardians are a four-man team comprised of hotshots from the four branches of the US military, their mission to safeguard the president in the event of a nuclear war.

In this first novel the s*** hits the fan as Russia, after losing a conventional war, launches a nuclear strike on the US. 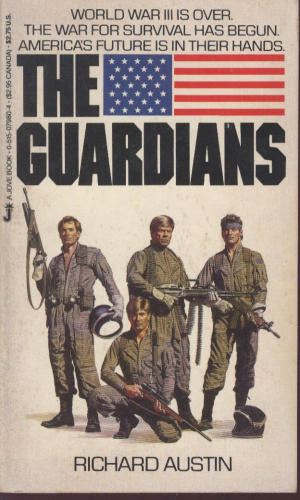 Not the answer you're looking for? Browse other questions tagged story-identification novel books post-apocalyptic or ask your own question.