I'm looking for the title of a fantasy novel series I read a few books of when I was younger. At this point all I can really remember is that the female warrior protagonist MIGHT have been called Raven or something similar, and the covers tended to show her half naked in her warrior getup, wielding a sword.

Sounds very much like an old sword-and-sorcery paperback I have in my collection, but I haven't looked through it in ages. It's the first volume of a series of five about the same lead character. Raven: Swordsmistress of Chaos, first published in 1978, and written by Richard Kirk. (Or so it says on the cover -- we'll get back to that point of the real name of the author or authors in just a minute.) Here's a cover-scan of one edition of the book in question -- perhaps it will strike a chord in your memory. 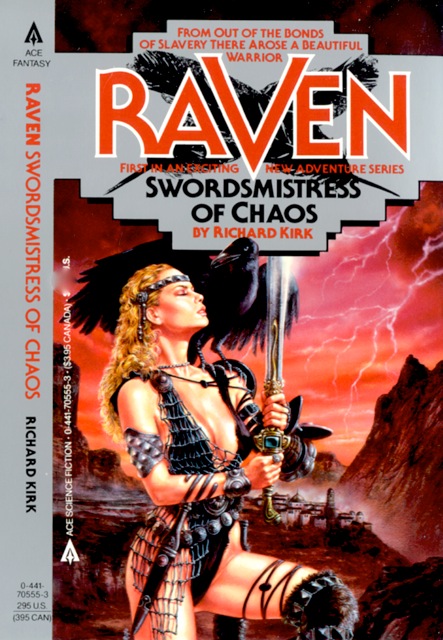 Amazon lists the full phrase "Raven: Swordsmistress of Chaos" as the title, but ISFDB seems to think the "Raven" part, in such big letters on the cover, was just establishing the name of the entire series, and was not the first word of the official title of that first installment in the series. (I don't know who's right or wrong.)

Incidentally, just now, doing some online research, I learned that "Richard Kirk" was an early pen name used by the fantasy author who later become much better known after the award-winning novel Mythago Wood was published under his own name: Robert Holdstock. According to Wikipedia's Bibliography of his published works, Holdstock actually co-wrote the first Raven book with Angus Wells, and he also wrote (apparently all on his own) #2 and #4 in that series, but had nothing to do with the writing of #3 and #5. The Wikipedia entry for the author Angus Wells gives him full credit for those two sequels. (Since I've only read #1, and didn't even know until tonight that it was only published under a pseudonym, I can't swear of my own knowledge that Wikipedia has all these details exactly right regarding who wrote what.)

Amazon offers the following summary of what the first volume of the series is all about. Does any of this ring a bell for you?

Raven -- She escaped the slavepens of Lyland--a beautiful girl with hair the color of summer sun, eyes as blue as the heavens, and a body that invited love. Rescued by sorcerer priests, she was schooled in every art of weaponry and combat. Her sword stained by the blood of legions, no man could defeat her. With her mysterious companion-mentor Spellbinder, and a great black bird to watch over them, Raven journeyed forth to her destiny--and the happy day of slaughtering Karl ir Donwayne, the cruel master who had tortured her mercilessly as a slave...

Not the answer you're looking for? Browse other questions tagged story-identification sword-and-sorcery or ask your own question.

5
UK pulp magazine with a cover featuring a warrior, a pile of worms, and a damsel in distress
15
old fantasy novel with ravens or crows and magic staff
8
Epic Fantasy Novel with Runes
7
What children's fantasy series has furry hardback covers and stone-skimming dragons?
9
Novel where a berserker involuntarily kills a female magician he may have loved
4
90's Young adult fantasy novel with a shapeshifter character with purple/violet eyes
9
Fantasy novel starring shaman-swordswoman, last of murdered clan
17
Series about female warrior in Arthurian-like medieval Britain