Was Nagini the only snake which could become human?

Recently launched trailer of Fantastic Beast 2: Crimes of Grindelwald has proved that being Animagus (I don't have proper word) was Nagini's inherent quality, not something assisted by Voldemort when she had became Bathilda Bagshot.

Which kind of snake Nagini really is? What species she belong to? Or, is she the only snake who is Animagus?

Nagini is now said to be a Maledictus, not an Animagus.

J.K. Rowling specifically contradicts the idea that Fantastic Beasts: The Crimes of Grindelwald is suggesting that Nagini is meant to be an Animagus. Instead, she’s said to be a Maledictus, which JKR further states is very different from being an Animagus.

What some of these differences are already is made clear. From her further tweets on the subject of Maledictuses, and interviews released with new information on them, a good amount of the differences between them and Animagi can be deduced.

We know Maledictuses are only women who have a hereditary curse that’s passed through the female line because JKR says it in a tweet. 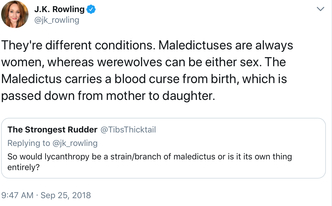 The actress playing Nagini in Fantastic Beasts: The Crimes of Grindelwald confirmed the transformation will eventually become permanent and she’ll remain a snake.

The actress reveals that when Crimes takes place in 1927, Nagini can transform from human to snake at will, yet due to her mysterious blood curse she knows that eventually, she’ll become a snake permanently. “She does feel sometimes it’s not controllable,” Kim says. “She is bound to [permanently] transform at some point to a beast so she feels this pressure that the clock is ticking.”
- Fantastic Beasts actress Claudia Kim breaks silence on playing Nagini (Entertainment Weekly)

She also says that her character doesn’t have a wand, and though she does have powers not explained yet, she mightn’t have the same powers as wizards.

“She has powers that are yet to be explored,” Kim says carefully. “I can’t confirm she has powers like wizards have. And she doesn’t have a wand.”
- Fantastic Beasts actress Claudia Kim breaks silence on playing Nagini (Entertainment Weekly)

Though both Animagi and Maledictuses can turn from human to animal, there are clear differences in both how they have this ability, and what having it means for them.

Logically, there’d be other Maledictuses - it’s a hereditary curse.

Though there’s only one Maledictus mentioned so far, it’s very likely there would be others. As it’s a hereditary curse passed from mother to daughter, it seems likely that Nagini’s mother would also have been a Maledictus, as well, and possibly some of her other female ancestors as well. It’s unclear as of yet where the Maledictus blood curse comes from, but she can’t be the only one in existence if it’s known to be a hereditary curse passed through the female line,

Though there are likely other Maledictuses, not all Maledictuses transform into snakes, they can be other creatures as well. J.K. Rowling said this in a tweet replying to a question. 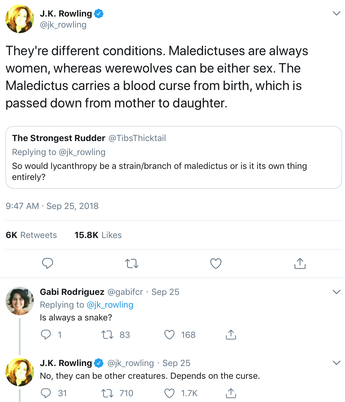 So, how many Maledictuses will turn into snakes, rather than other creatures, still isn’t clear. It’s also not clear as of yet what specifically causes a Maledictus to transform into the creature it does.

She's a Maledictus. She carries a curse in her bloodline that allows her to transform, but will one day grow beyond her control and transform her into a snake permanently. After the latest reveal from the Fantastic Beasts trailer, J.K. Rowling has provided some of this information in tweets.

Not an Animagus. A Maledictus. Big difference. link

How long have you been holding that Nagini secret?? @jk_rowling

Only for around twenty years. link

They're different conditions. Maledictuses are always women, whereas werewolves can be either sex. The Maledictus carries a blood curse from birth, which is passed down from mother to daughter. link

This would also mean that whatever was done with Bathilda Bagshot was not an Animagus transformation. Either Nagini or more likely Voldemort worked a magic to animate her corpse.

Nagini was a Maledictus

As shown in the new trailer to Fantastic beasts we learn that Nagini was human, but later from JKRs tweet we learn she was not a Animagus.

They're different conditions. Maledictuses are always women, whereas werewolves can be either sex. The Maledictus carries a blood curse from birth, which is passed down from mother to daughter
- J.K Rowling on Twitter

Later we find out why Nagini was never mentioned as turning Human in the Harry Potter books.

The Maledictus appears to be a beautiful, young woman, but she is a carrier of a blood curse that ultimately destines her to transform permanently into a beast.
- Fantastic beasts 2 character description - Collider

So at some point past or possibly before when she met Tom Riddle she permanently transformed into her snake form. So it actually was Voldemort aiding Nagini to reanimate or control the corpse of Bathilda Bagshot.

One particularly persistent memory is of Harry and Hermione going to visit Bathilda Bagshot, only to discover she’s been dead for quite some time, and Nagini has been hiding in her corpse, waiting for them.
- Everything You need to know about Nagini - Pottermore

Note how it says hiding in her corpse, but yes it was not Nagini transforming into Bathilda it was just some advanced form of Magic that would reanimate/ allow Nagini to control (like a pupeteer) Bathilda's body. In conclusion Nagini is the only Maledictus we know of (yet) but seeing as it is a whole species (ish) it is probable that there are more.

28
What Kind of Snake Is Nagini?
14
Was Nagini Technically an Inferius When She Possessed Bathilda Bagshot's Body?
32
Where did Voldemort find Nagini?
11
How come Nagini had magical powers?

18
Is Nagini the snake Harry freed on Dudley's birthday?
28
What Kind of Snake Is Nagini?
3
Could Nagini read Voldemort's mind?
2
Could Voldemort possess Nagini?
9
Why was Theseus at the Rally?
9
Who was Credence travelling with on the boat?
1
Why was Jacob still hanging onto the bucket?
6
Was the tree pictured in this scene the Whomping Willow?