I've been thinking for a month now about this very old cartoon or even Japanese anime, in which there was a girl who had to go inside a PC to protect someone (the prod of that PC word?).

The story revolved around a girl, an “ex-fiancé” and two main digital entities. Of the latter, one is a god and the other one becomes bad (this last one took the form and appearance of that ex-fiancé).

At the end, it was revealed that the good entity that some day, just appeared in the girl's computer screen, was indeed send by the now evil entity.

That girl just materializes into the computer's world, and in my own opinion it was really co (the good entity was like a guardian of that world).

This is not Code Lyoko. I do remember having seen it during my first years at the elemtary school, so between 2000 and 2006-7. I’d really like to find it out! I remembered it because when I was younger I saw merely the last few episodes.

Could you be talking about .hack//SIGN? Granted, what you describe doesn't exactly match with the overall plot, but if you only saw the last few episodes (and only half-remember those), then your description could kind of line up.

A young wavemaster, only known by the alias of Tsukasa, wakes up in an MMORPG called The World, with slight amnesia. He does not know what he has previously done before he woke up. In The World, the Crimson Knights suspects him of being a hacker, as he was seen accompanying a tweaked character in the form of a cat. Unable to log out from the game, he wanders around looking for answers, avoiding the knights and other players he meets along the way.

As Tsukasa explores The World, he stumbles upon a magical item that takes the form of a "guardian," which promises him protection from all harm. Subaru, the leader of the Crimson Knights, along with several other players who became acquainted with Tsukasa, set out to investigate why Tsukasa is unable to log out, and attempt to get to the bottom of the problem before it gets out of hand.

If not, please also consider .hack//Legend of the Twilight. I never saw it, but it shares many of the same elements, and from the synopses I've read, it also could be a match.

Winning the legendary characters "Kite" and "Black Rose" from an event held by the creators of the MMORPG "The World," Shugo and his twin sister Rena steps into "The World." Together they completed events and quests, along with their new friends Ouka, Mirelle, Hotaru, and Sanjuro. Soon after, mysterious monsters appeared, and death by these monsters caused players to slip into a coma in the real world. Only Shugo and Rena can solve this problem, but why are they being targeted, and what secrets is the game hiding?

Are you thinking of Serial Experiments Lain?

The anime you are looking for I'm pretty sure is Corrector Yui https://myanimelist.net/anime/111/Corrector_Yui 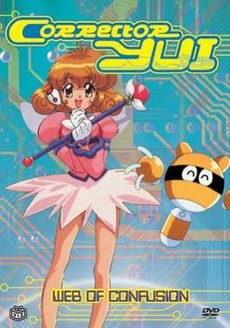 Not the answer you're looking for? Browse other questions tagged story-identification anime cartoon soft-sci-fi or ask your own question.

2
What dark anime show had a character with organic armour who fought for good?
9
Japanese movie with girl who goes boom at the end
8
90s (or earlier) mecha anime: dormant robot chooses a teenager as its pilot, they fight a dog robot and an ostrich robot
9
2000's cartoon where a six-fingered pianist gets his extra finger(s?) removed for the girl he likes
10
Sci-Fi/Fantasy Anime about a girl who turns into a world-destroyer
6
Cartoon/anime with spherical androids that had limbs but could contract into a complete sphere
3
Female anime character with powers and an amulet on her chest
11
Anime Identification - Female mage bitten by small creature