There's this vampire romance series. In the first book, the male lead (Kaden, I think is his name) kidnaps a human woman and her psychic daughter. The lady also has a sister, Emma, who is in hiding. Kaden (?) has a couple of brothers, I think. They all live in a compound. There are also shifters in the story. Oh, and the FBI knows about the vampires existence.

Could this be Fated by Rebecca Zanetti? The main character (Cara) has a sister (Emma) and a psychic daughter (Janie). She comes into contact with the main vampire character (Talen, not Kaden) quite early on in the book.

Marry Me! Cara Paulsen does not give up easily. A scientist and a single mother, she's used to fighting for what she wants, keeping a cool head, and doing whatever it takes to protect her daughter Janie. But "whatever it takes" has never before included a shotgun wedding to a dangerous-looking stranger with an attitude problem.

Or Else! Sure, the mysterious Talen says that he's there to protect Cara and Janie. He also says that he's a three-hundred-year-old vampire. Of course, the way he touches her, Cara might actually believe he's had that long to practice. . . 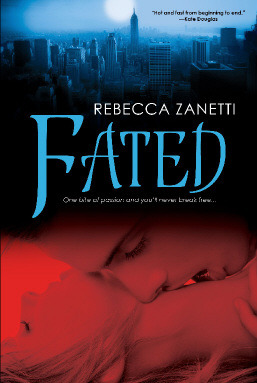 Not the answer you're looking for? Browse other questions tagged story-identification soft-sci-fi vampire psychic shape-shifter or ask your own question.

3
Shifter book series with the alpha's daughter as the main character through out the series
12
Movie Identification: 1980/1990's movie with flying creatures and a beautiful actress
9
Trying to find a story were there are two humans on an alien world of many species but one ruling species
31
Sci-fi novel about biological computers put into people's heads, making assassins
8
Name of a werewolf novel from the 80's
3
Webcomics/manhwa/manhua (not manga) about a hero who reincarnates as a noble lady