What is the meaning of the Hebrew characters that appear when a soul is absorbed into Ragman's suit?

Ragman is my favorite superhero. For me, he is one of the best Jewish superheroes. A mystic vigilante created by Joe Kubert and Bob Kanigher who first appeared in 1976 in a short-lived comic-book series named after him. He lives in Gotham City.

Ragman can absorb souls into his costume. With each new soul added, a rag is added. He can call upon the souls in his costume to lend him their attributes or power. So far, I have found at least in two DC Batman issues (Batman Legends from the Dark Knight #51 Snitch - 1993 and Batman Meets the Vengeful Ragman #551 - 1998) that when the soul absorption happened, the pencillers David G. Klein and Kelley Jones used seared Hebrew characters.

Can anyone tell me the meaning of those characters? 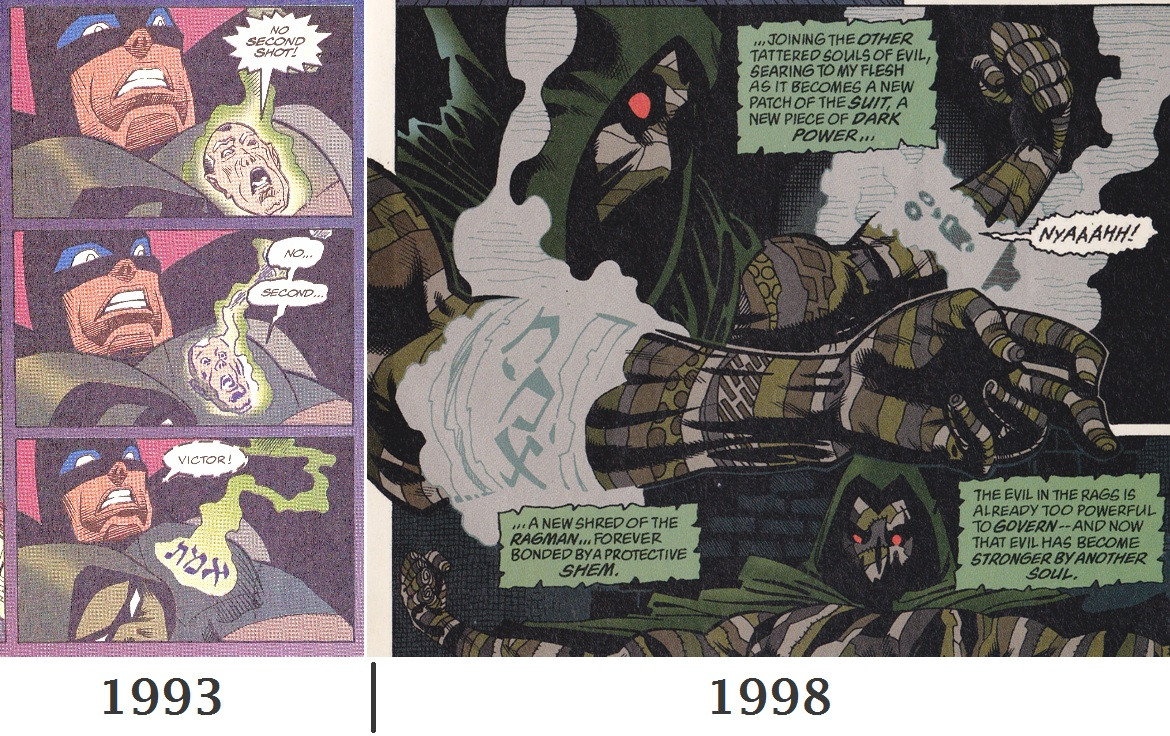 I found another appearance of the Hebrew characters in #4 and #5 of Ragman: Cry of the Dead (1993) but they are seared in the forehead of the Golem instead of Ragman's suit. The Hebrew characters look similar to the ones on the prior cited 1993 issue but with dots in two of them. 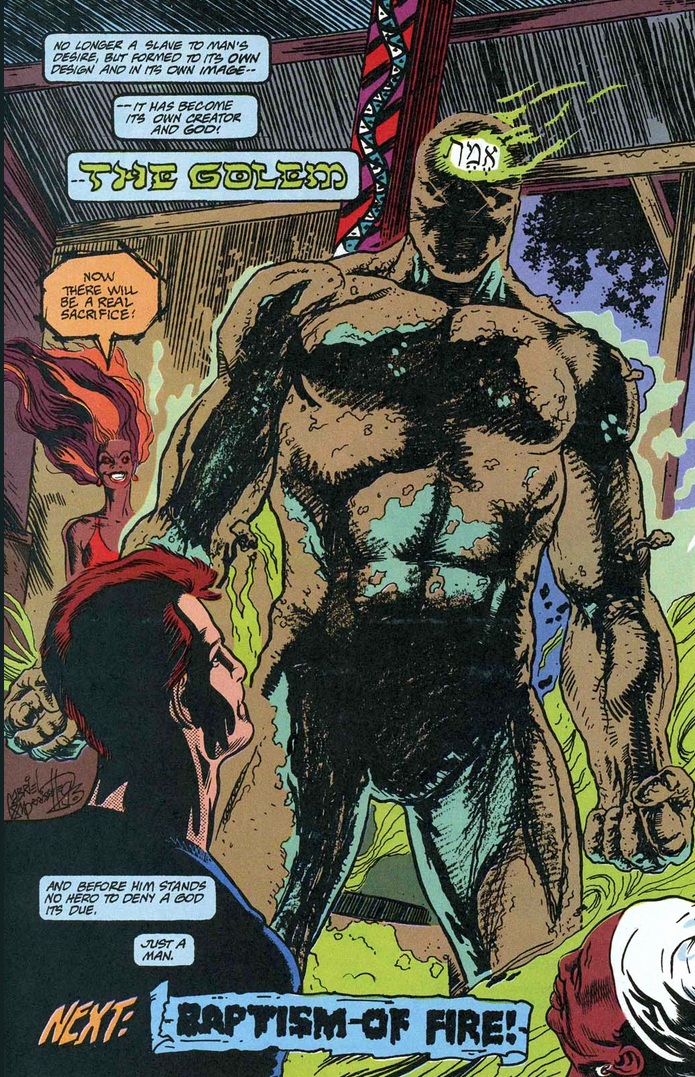 Daniel Rosman's answer correctly identifies the word אמת (emmet) which is the Hebrew word for "truth". However, there is another Hebrew word in the right panel that is written in Latin characters. In the bottom left corner the text says:

... A new shred of the RAGMAN... forever binded by a protective SHEM.

The word shem is the Hebrew word שם, which means "name". In addition to the simple meaning "name", in certain contexts it can be used specifically to refer to holy or Divine names, that are usually invoked for some supernatural purpose. In Jewish lore you can find protective amulets with such names inscribed on them.

Additionally, the (Hebrew) Wikipedia page for the Jewish name for God says the following (my translation):

In Jewish Folklore, those who know the Secret Wisdom would blow the breath of life into a golem by means of writing the Ineffable Name on a piece of paper and placing it in the mouth of a lump of matter, following which they would write the word אמת [emmet – "truth"] on its forehead. When it was necessary to stop the operations of the golem they would erase the letter א [aleph] and what remained would be מת [met].

(Slight explanation – the Hebrew word א-מ-ת is one letter off from the Hebrew word מ-ת. The former means "truth" while the latter is the word for death. Thus by removing the first letter (the א) from the word אמת that was written on the forehead, you would be left with the word מת, signifying that the creature should "die", or shut down.)

Thus, (as mentioned in the other answer) this comic may be referencing the use of the word אמת to activate/deactivate a superpowered creature.

The Hebrew word in the third panel that was edited into the question is the same word: אמת (emmet) – "truth". The slight difference between its appearance here and in the other panels is due to the inclusion of nekudot – dots. Hebrew words can be written with or without nekudot. These dots instruct the reader how to vowelize the word, because the Hebrew alphabet is (for the most part) all consonants. The set of dots under the two letters in this case are segol which tells us that the vowel sound should be "eh". Without the inclusion of the dots the word would technically just say 'mt without telling you that the two syllables both have the "eh" vowelization. Most people familiar with Hebrew would recognize that the letters א-מ-ת are pronounced with the "eh" vowelization, so it is usually not necessary to include the dots.

The 1998 version is not actual Hebrew characters.

As Adamant says in the comments, this is a reference to the Golem of Prague, which had that word inscribed on its forehead to give it life. (Off topic, but the Golem has another relationship to comics in that it appears in Michael Chabon's The Amazing Adventures of Kavalier & Clay, an excellent novel about two Jewish boys who create an iconic comics character in 1930s New York.)

Not the answer you're looking for? Browse other questions tagged dc translation ragman or ask your own question.

14
What is the secret of Superman's suit?
17
What is The Flash's suit made of?
5
When did these characters elude Bane in The Dark Knight Rises?
8
What does Frodo say when he pulls out the phial?
7
Who are the two thieves that appear the opening of Batman: TAS?
3
What is the meaning of Cassandra's vision of Lex in “Smallvillle” S01E06?
2
What is the meaning of “the mouthpiece of certain power”?