What was the name of the magical robot from Dr. Strange?

When my father was a teenager in the 60’s, he and his friends loved Dr. Strange more than any other comics. Then one day, Dr. Strange was attacked by some kind of magically powered robot. Issue after issue, Strange would try everything to defeat the robot but every one of his spells bounced off the robot, and still it kept coming. Finally, the showdown came to an end, Strange was cornered with nothing else left to him- and the robot tripped over its own feet, fell down, and broke into pieces.

My father carried the outrage at this until the day he died, feeling betrayed by his favorite character. He refused to even see the new movie two years ago, still nursing his grudge.

I thought his memory of the scene might be inaccurate, and looked up the scene in question. I managed to find the comic, and sure enough on page 2 or 3, the robot tripped over its own feet and fell apart. Strange then goes on as if nothing happened.

I wanted to look up the comic again, but I don’t remember the name of the robot, and obviously my father isn’t around anymore to ask.

I am fairly certain the issue was from the 60’s, from my memory of the artwork. It would also fit with my father being a teenager or early 20’s still at that time. By the late 60’s he had dropped out of comics and turned onto other things, so to speak, so I think it’s no later than 1967-ish if that helps at all.

In Strange Tales #165 (1968), Doctor Strange went against Yandroth, Scientist Supreme. They fight the good old way (read: lots of punching), and Strange has the upper hand, but the issue ends with the reveal of Yandroth's latest creation, the robot Voltorr. Voltorr's source of power is the "lightning of the universe", which can "obliterate human life".

To be honest, given that Yandroth is the "Scientist Supreme" I'm not sure if it's supposed to be some kind of magic, but then again, the idea that 60s comic books writers had of science was sometimes borderline magic. 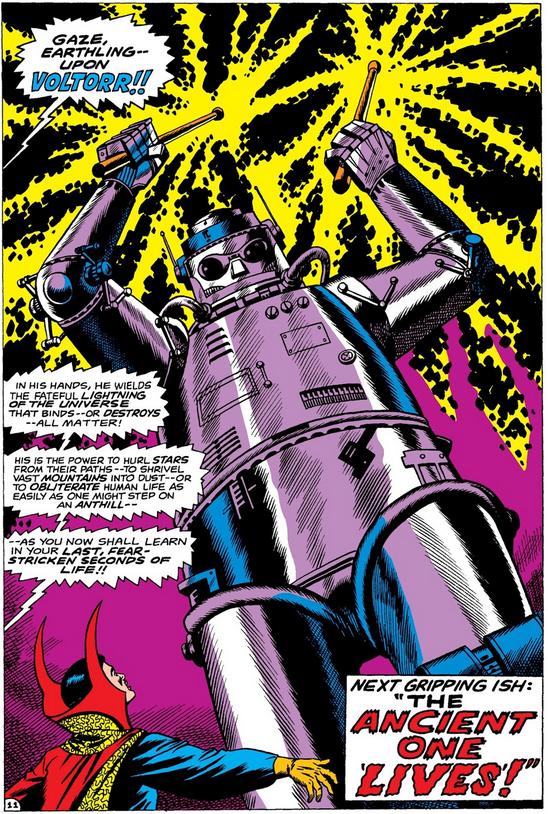 The next issue has Strange trying out some spells against the robot (now named Voltorg), and he does manage to "blank out its scanner circuits", but in the meantime he also gets thrown around a lot, dodging blasts at the very last moment (or not), and eventually realizes that the robot only has one weak point: his eyes. He proceeds to strike Voltorg right in the face. 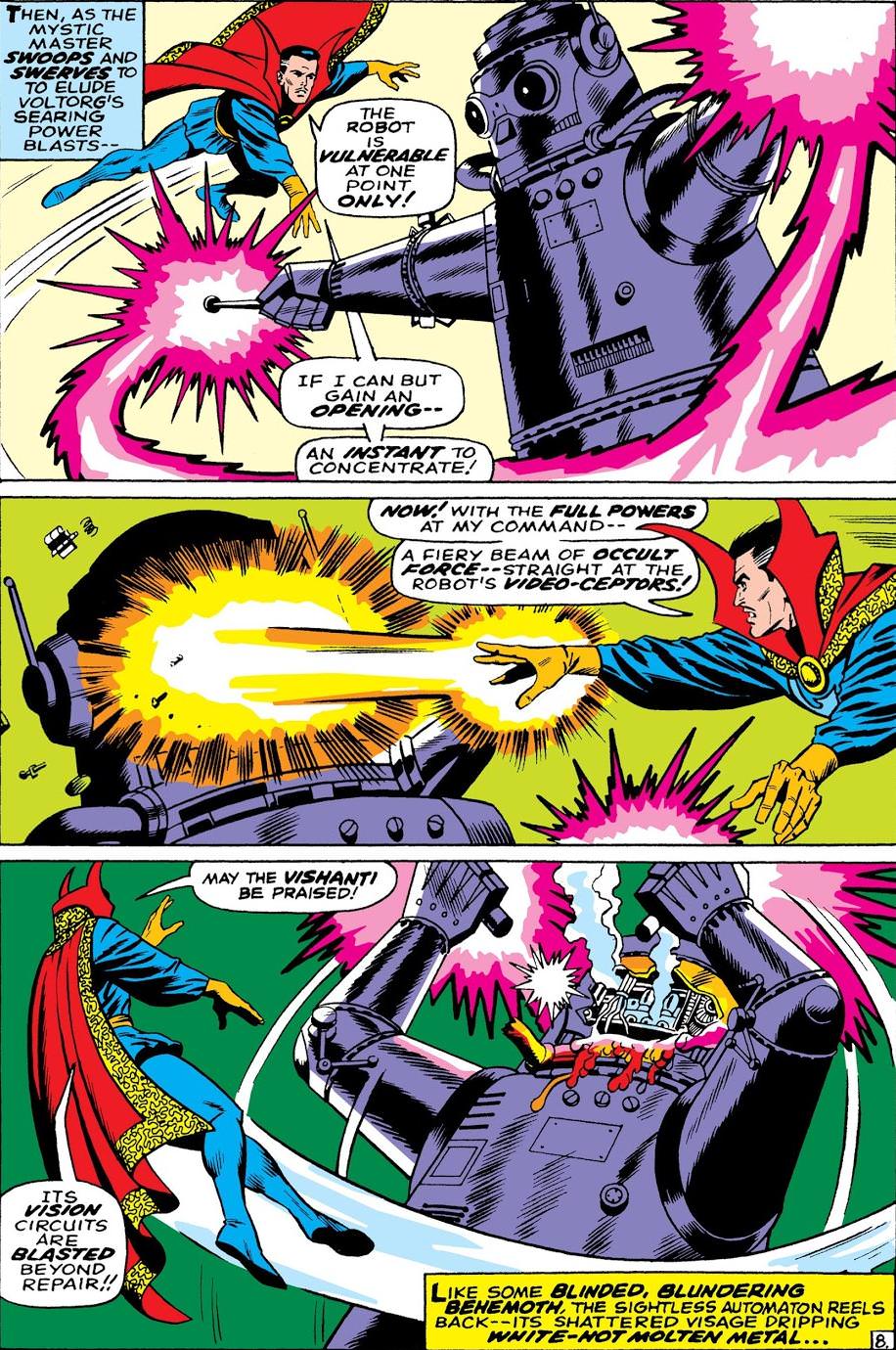 The now blind robot wanders around, trying to blast Strange, but eventually hits a wall, making one big hole in the process, falls down and breaks into pieces. Strange then goes away to try and catch Yandroth. 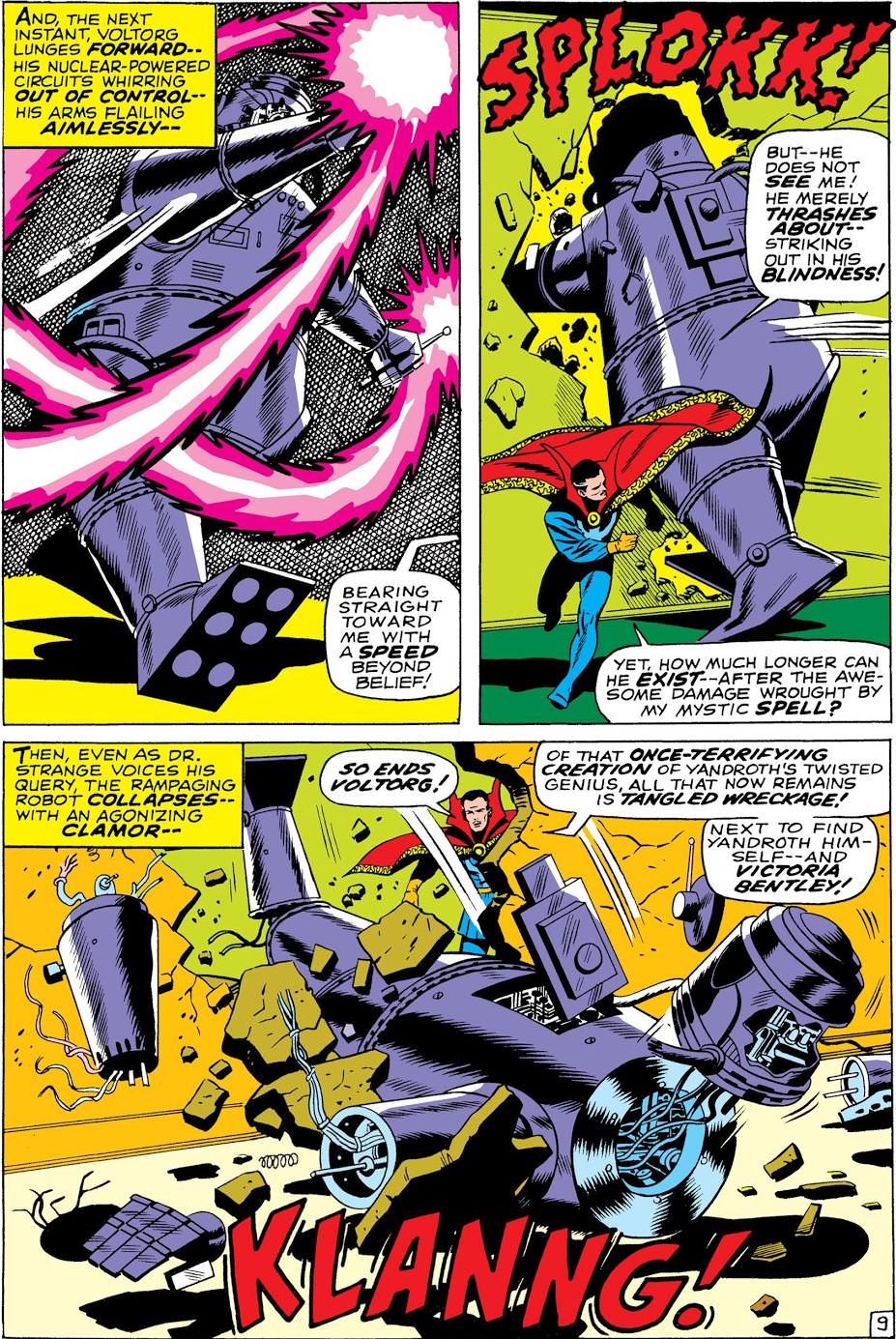 Not the answer you're looking for? Browse other questions tagged marvel comics character-identification doctor-strange or ask your own question.

10
How is the Vision capable of love?
5
Who told Clark about the bullet train problem?
4
What does Dr. Strange summon from the Blood Bible?
7
Marvel comic with robot aliens and major superhero deaths
14
Trying to identify an old Marvel Comics robot villain (not Ultron) from the 1970s?
3
What magical tomes does Dr. Strange possess?
5
Blackhawk comic book, moon base, killer robot
6
Comic about a (possibly) mutant soldier with a partner attempting to avoid a sniper/enemy
5
Comic where a baby kills its parents because it wanted to stay in the womb
7
By the Immortal Gods of the Sith! Was Darth Vader being literal?