Anime about a pirate submarine on a flooded mars

Around 5 to 10 Years ago I had seen an anime series that was set on Mars, which was flooded to create pretty much an ocean world.

A particular scene that I remember relatively clearly was when the main cast did visit a preserve for native martian humans, that turned out to be pretty much a farce: behind the surface of primitive life (think like a native American preserve), the huts were stuffed with all the amenities of the modern martian life.

This appears to be Mars Daybreak

It hits all the main points:

With the surface under heavy satellite surveillance, the pirates have been forced underground. Or rather, underwater. Instead of sailing over the waves, they lurk under them in submarines. And the baddest pirates around are the crew of the sub Ship of Aurora.

Which brings us to our hero, Gram River: A young man living on the city-ship Adena. While trying to help a friend get out of a bad situation, he ends up in the middle of a raid by the Ship of Aurora, and thrown overboard when the port is rammed and breached... He is eventually hired on by the crew - https://tvtropes.org/pmwiki/pmwiki.php/Anime/MarsDaybreak

The ocean-covered environment makes a perfect setting for commercial trade ships and pirates to utilize submarines to make a living. At the same time, the pirates also raid those very trades for personal profit. The most renowned and feared of the pirate vessels is the Ship of Aurora, which makes a habit of reselling its booty cheap so that it can be redistributed to the less fortunate folk. - https://en.wikipedia.org/wiki/Mars_Daybreak 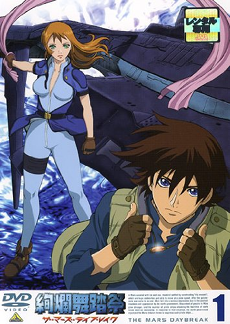 4
Book identification: Book about an adolescent boy interested in WW2 memorabilia, wakes up in different time period.
10
Book about a boy who travels to a parallel universe to get a book
6
Book where alien empire takes over earth and moves humans to planets named after the continents
4
Animated TV show about pirates in a future earth
4
Old anime show with pirate, princess, and boy
7
Trying to find a book I read ages ago about telepathic aliens on a colony world
5
What story has the phrase "to make Heaven (or perhaps Paradise) around you is best?
21
Fantasy novel/series with young man who discovers he can use magic that is outlawed