What does the Venom symbiote subsist on?

The comics always seemed handwavey about this in my memory, saying that the symbiote was absorbing the life energy of its host or some such twaddle. Fine.

But when Spider-Man (and then eventually Eddie Brock) bond with the symbiote, the symbiote does one interesting thing: it replicates the web shooter function. Webbing shot is actually part of the symbiote transforming itself into webbing. Fine and dandy, but the mass has to come from somewhere. In some way, shape, or form the symbiote must absorb mass to make up for the mass loss. In effect, it must eat something. What does it eat?

Looking for answers from the comics for preference but the movies will also be acceptable if necessary. Not looking for real world explanations here.

It's a monstruous-looking alien from outer space. What did you think it was going to eat, brains? Pffft, Venom's totally into...

Okay, well, technically, the other needs phenethylamine to "stay sane and healthy", not necessarily to regenerate matter mass, but there is mass ingestion. It's not so much of a stretch to imagine that somehow, the chocolate matter absorbed can be transformed into Klyntar (Symbiote) matter; you know, kill two birds with one stone. 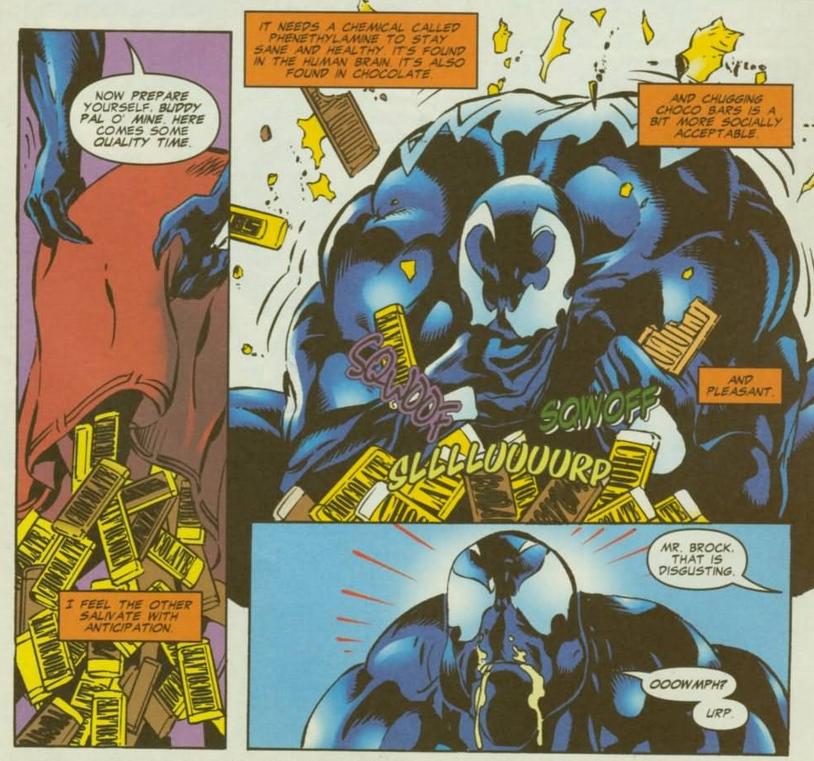 Hey, I can read. The panel above does imply that Venom has a thing for brains.

Well, true. Venom has also been shown to eat...

And the people around it, for good measure.

The mini-series Venom: The Hunger (1996) has Eddie Brock not being able to generate enough phenethylamine for the other to stay sane, so the Symbiote slowly goes, well, out of control, and crawls the city for brains, which contain the precious molecule. 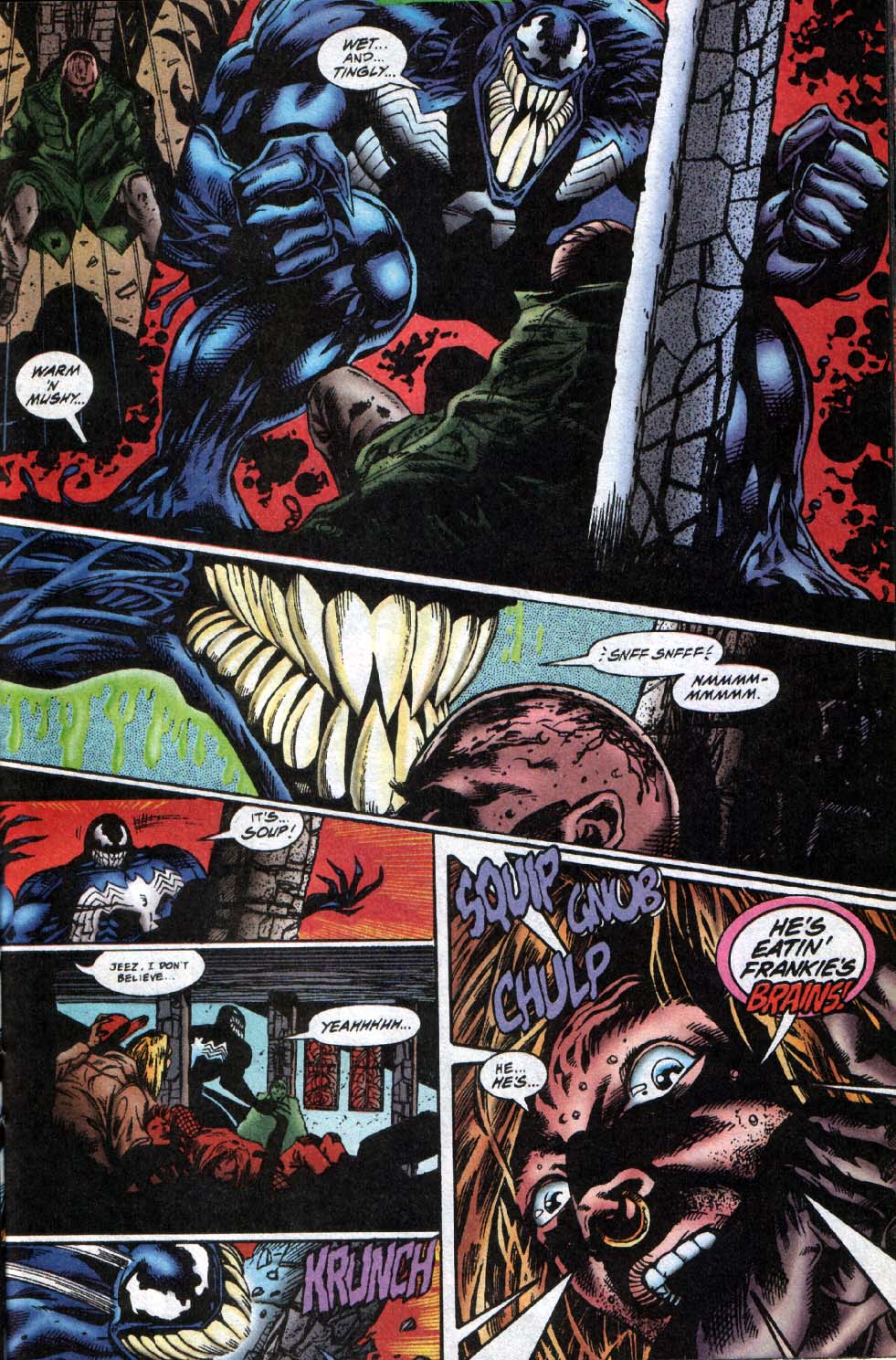 There are several instances of the sort in the series (panel above is from issue #1), which is one big chunk of 90s gory Marvel. But, ends up with a sweet reunion between Brock and his other. No, really. It even introduced the "chocolate as food for the Symbiote" thing with Eddie offering the Symbiote a heart-shaped chocolate box.

We often underestimate how useful our puny human bodies and feelings are to extraterrestrial life forms. Enter Carnage, who originally was a spawn of Venom.

In Superior Carnage Annual #1 (2014), Carnage (Symbiote part) has been separated from Cletus Kasady (the human part of Carnage). One female scientist studies a tiny chunk of Carnage goo left behind. In a lab, alone, after hours. What do you think happens? Stuff jumps onto her and three pages after she's a full-fledged Carnage. (panels in links; too much images in answer drift us away from the point)

So where did the mass came from? According to Carla Unger (Unger - ironic name - got it?), the thing was eating stuff in her insides. 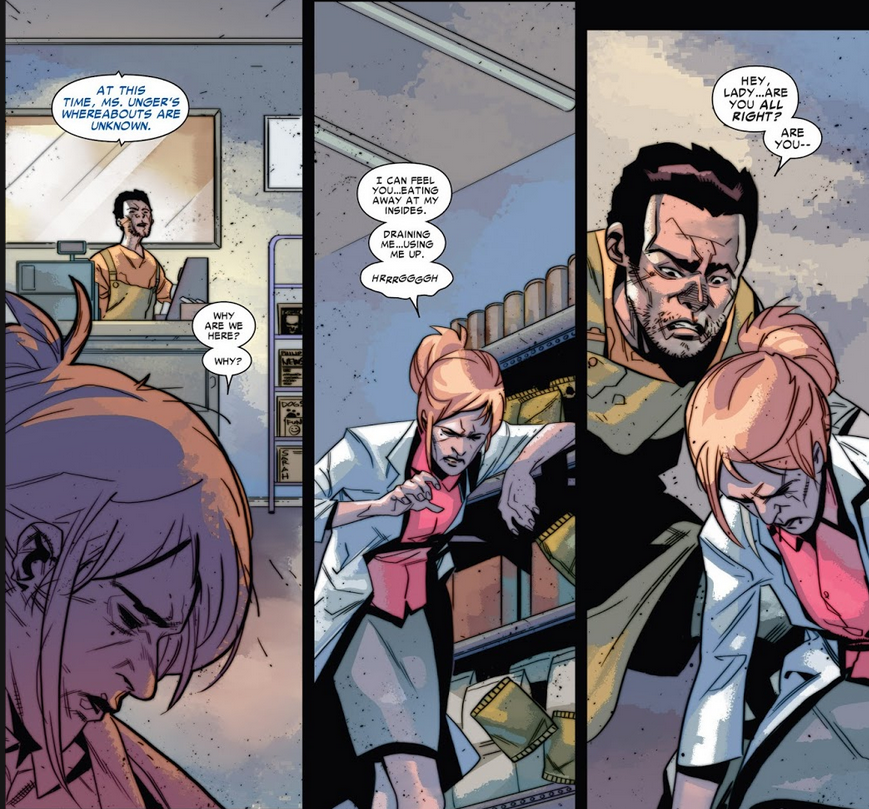 Once again, it's Carnage and not Venom, but they're the same species. Carnage is also shown getting bigger and badder after absorbing its opponents' mass (for instance, this gorgeous page from Carnage #4, 2010).

Whatever foreign matter it dissolves

In Venom #7 (2018), Eddie gets a quick reminder from Reed Richards ("No, not that one") about what the Symbiote's waste is. Waste is excreted from "dissolved foreign matter that enters the host's body". The matter, in this case, being several rounds of bullets. It's not too much of a stretch to think part of that is converted into exploitable mass. 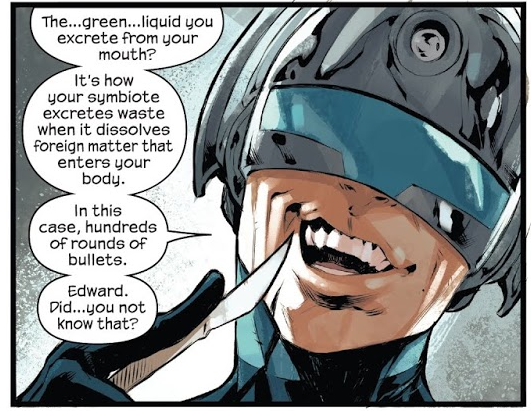 The main point of all this being, Symbiotes' nutrition is mainly based on molecules, but since we see them ingest various stuff, we can speculate that the mass absorbed then is later transformed into exploitable mass.

Unfortunately, the main explanation for mass generation is the offspring of the union between comic books' understanding of science, and the From a Single Cell trope: if you already have a bit of mass, well that thing can become more mass! Because, physics!

The trailer for Venom (2018) tells us that he eats people. View the following gif from 1m 34s into the linked trailer.

Eyes! Lungs! Pancreas! So many snacks, so little time!

We then "see" Venom eating someone after stating that he was going to do that starting at 2m 27s in the tralier.

We will eat both of your arms, and then both of your legs, and then we will eat your face right off your head. You will be this armless, legless, faceless thing, won't you, going down the street like a turd in the wind!

Not the answer you're looking for? Browse other questions tagged marvel spider-man venom or ask your own question.

7
Why does the Symbiote need a host?

4
How can the Venom symbiote live off Electro?
6
Did the Venom symbiote inhabit the Hulk?
6
Is the only way a Symbiote can truly die, by choice?
7
Why does the Symbiote no longer set off Spider-Man's spider-sense?
11
Why didn't the Venom Symbiote turn Peter Parker into a monster like it did with Eddy and Cassady?
4
Why did Venom fight Jack O'Lantern?
7
Why does the Symbiote need a host?
29
Has Venom ever used the phrase “I am Venom” in the comics?
13
Why did Venom keep spider thread after separating from Peter Parker?