Manga with an assassin with eyes that can kill

I'm trying to find a manga I've read before. It's about a pair of assassins/mercenaries/hired killers (by their company).

In the first chapter they jump off a building onto a car (after a crash?) at night. They kill their target but a bystander sees them and faints and is taken to the hospital. Not knowing what to do they take him with them until they get confirmation on whether to kill him or not.

Could the manga you're searching for be Get Backers

The series tells the story of Ginji Amano and Ban Mido, a pair of super powered individuals known as the "GetBackers". The duo operates a freelance repossession service out of one of the seedier areas of Shinjuku, Tokyo. For a fee, they will recover any lost or stolen item for a client with "an almost 100% success rate". The GetBackers' job often leads them into bizarre and dangerous situations in order to "get back what shouldn't be gone". Their targets range from lost video games to misplaced components of an atomic bomb. The plot mostly revolves around their adventures, often complicated by the pair's convoluted, individual pasts and a mysterious place known as the Infinity Fortress. 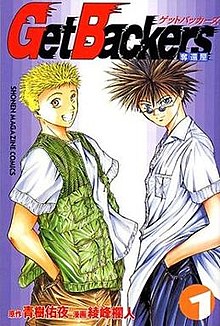 The blond one has electric powers and the dark haired one has enhanced strength and magic eyes that create illusions.

5
Manga with a god that sells dreams and a variety of god/animal characters
6
Romantic manga with time-traveling police officer
4
Manga about a girl being able to see through animals' eyes and control them, who solves a crime
6
Manga where the main character wears an eyepatch (that can sprout legs) over a golden eye
4
Manga with main character abandoned by goddess and class
6
Manga with life burning power